Shining bright, how a business owner navigated the return to employment and kept her side hustle

The global impact of the pandemic on the workplace has been immense but consider the small business owners who are voluntarily returning to the workplace as employees while also keeping their businesses as a “side hustle” (a modern complimentary term that has replaced ‘moonlighting’ in the lexicon as that has negative connotations). Entrepreneur Louise Bunyan, winner of Network Ireland West Cork Employee ‘Shining Star’ and founder of SmartFox.ie has done just that, prompted by her dream of becoming a homeowner, a move to Clonakilty and landing a remote role for VMware, one of the world’s leading tech companies. 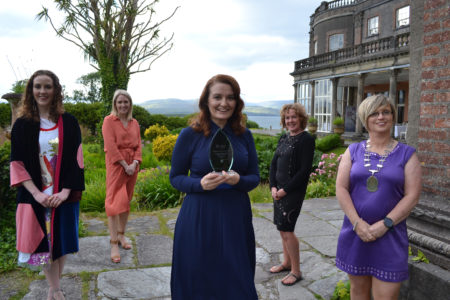 Louise never set out to become an entrepreneur. With over 15 years’ experience in marketing and communications, and a speciality in recruitment marketing she was made redundant suddenly in October 2016. Interviewing unsuccessfully for months, she then completed a ‘Start your Own Business Course’ with the Local Enterprise Office and SmartFox.ie was born in April 2017.

Initially providing general marketing consultancy and social media training, her reputation as a leading LinkedIn expert grew, and in reply to huge demand, she specialised in LinkedIn training to sales teams, universities, one to one coaching, in addition to public speaking events. The future looked bright, and after availing of financial coaching through Network Ireland, the next step was to build an online school in order to automate, scale internationally and build bigger revenue.

Over 12 months Louise painstakingly built www.smartfoxtraining.com, Ireland’s only dedicated online LinkedIn school and created a suite of courses with over 140 video lessons. It was launched in early March 2020 to a great reception, but just before the first tremors of the pandemic began to grab hold. Over 500 users have registered across paid and free mini-courses with more new users continuing to sign up each week.

At the same time, Louise was being mentored by a leading e-commerce entrepreneur and through this process, she realised that building a new international e-commerce business required a significant online advertising budget and lots of time. She grappled with a decision – hire someone and take out a business loan or consider other options?

On top of that, Louise was also applying for a mortgage to buy her own home and quickly saw that banks preferred to see consistent income from a salaried worker compared to a self-employed person. Taking a step back, she moved to Clonakilty to take advantage of her ‘digital nomad’ status and noticed the rise in remote working for top roles. Deciding to take a chance, she once more ventured into jobseeking, preparing for the long haul and a gruelling process, while also continuing SmartFox as a side hustle.

She was shocked when she had two job offers immediately. So what made the difference compared to 2016? “I had a strong portfolio, a proven track record as a consultant, a profitable business and a stand out personal brand in addition to a large and influential network. Plus I’d learned how to sell and hustle through running my own business, and I’d invested in interview coaching – basically, everything that I didn’t have back in 2016!”

Speaking about her role as a Talent Marketing Specialist with VMware, “Combining all of my passions – a tech platform, recruitment marketing, developing training and content writing expertise, it felt as if this role had been created just for me. And VMware also has the ‘Work Here. Transform Everywhere.’ initiative with thousands of global remote and fixed work roles across all skills, which means that I can work remotely from West Cork with like-minded creative colleagues in locations such as the US, Canada, India and even Blarney! It’s been a total game changer and I’d encourage anyone to check out www.careers.vmware.com”

“Ultimately, winning this award reflects all of the ups and downs in my career to date including redundancy, unemployment and running my own business to finding the job of my dreams with VMware. It also shows the support that comes from being a member of Network Ireland and how this network has empowered me to dig deep, build up my resilience and develop my ‘bouncebackability’. I also love interviews now, so bring on the next stage!”, Louise said.