As things are opening up across America, Irish Festivals are drawing in the crowds

Last weekend a proud son of Carrigaline, Máirtín de Cógáin, who grew up on Church Hill sang before thousands at the biggest Irish Music Festival in the world, Milwaukee Irish Fest, with the Ambassador of Ireland to the United States of America, His Excellency Daniel Mulhall.

The Máirtín de Cógáin Project who are made up of John Williams on accordion (Solas), Pat Broaders on the bouzar (Bohola), Don Penzien on guitar (Gailfean), Gabriel Donohue on piano (The Chieftains) and Máirtín de Cógáin himself on bodhrán. 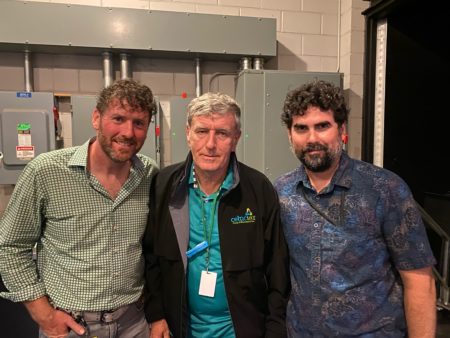 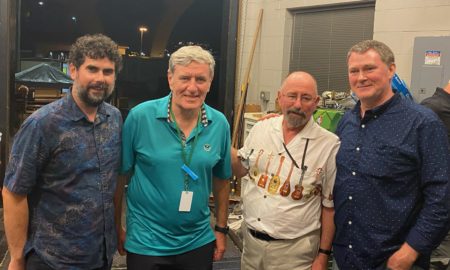 His band was one of over sixty acts at the four day festival in the midwestern state of Wisconsin. This year was the 40th Milwaukee Irish Fest which is always held on the third weekend of August. For the finale of the whole event a ‘Scattering’ is traditionally held on the main stage with all the bands together when all the other stages are closed down. This year, due to Covid restrictions, only a few people could be asked to add to the band ‘Cherish the Ladies’ who were one of the headliners. Máirtín was honoured to be one of the chosen eight. He would sing with the two other male singers Séamus Kennedy of Antrim and Rory Makem from Louth (son of Tommy).

Our man was given the task to take the lead on ‘Óró ‘Sé do Bheatha ‘Bhaile,’ the song he is well known for since he sang it in the 2006 movie ‘The Wind that Shakes the Barley’. When the Ambassador of Ireland arrived backstage Séamus and Máirtín both came to the conclusion that Mr. Mulhall would make a perfect fit for the quartet. Not only did he accept but he knew all the chorus’ for the rest of the show and the Ambassador took a verse of Óró and sang it on his own to the multitude before them.

‘It was a magical moment after being so long away from the road. For both us the entertainers and those being entertained,’ says de Cógáin who had not played for a live audience for 522 days until he stood out at the La Crosse IrishFest the weekend before.

He is not expecting a call to the White House just yet but knows a cúpán tae will be waiting for him in the Embassy in Washington D.C. the next time Máirtín finds himself on the East Coast of America.