The winners of the BT Young Scientist & Technology Exhibition (BTYSTE) 2020 and 2021 will compete against over 150 young people from 39 countries at the European Union Contest for Young Scientists (EUCYS) this weekend, at a virtual event hosted from Salamanca, Spain.

The EUCYS is the annual European showcase of gifted young scientists and the BTYSTE is the Irish designated competition, meaning that each year the winners of the BTYSTE go forward to represent Ireland on this European stage. In the contest’s 31-year history, Ireland has won first place 15 times. This year’s contest will combine the postponed 2020 event and the current 2021 event at a special virtual showcase from September 17th-19th.

Now aged 19 year, Greg Tarr (from Bandon, West Cork), whose technology project titled ‘Detecting state-of-the-art deepfakes’ won the overall prize at the 2021 BT Young Scientist & Technology Exhibition. He will compete in this year’s contest, along with Cormac Harris and Alan O’Sullivan who won the overall prize at the 2020 BTYSTE. Their social sciences-based project investigating the prevalence of gender stereotyping in 5 to 7-year-olds, will also represent Ireland before an international panel of judges. 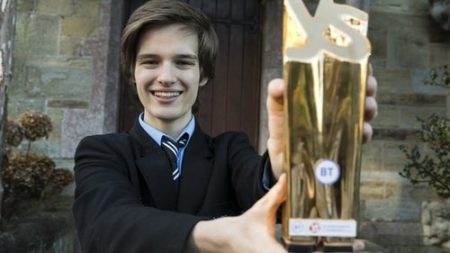 An Taoiseach Micheál Martin said: “I would like to wish Greg, Cormac and Alan the very best of luck as they prepare to represent Ireland at the EU Contest for Young Scientists this weekend. It is great to see our talented young students go on to present their projects on this international stage.

Ireland has an impressive track record at the European competition, demonstrating the incredible STEM talent coming through the BT Young Scientist & Technology Exhibition.”

I have no doubt that Greg’s project on identifying deep-fake images, and Cormac and Alan’s project on gender bias among five- to seven-year-olds and how to combat it, will impress the European judges this weekend. We’ll be watching the contest with great enthusiasm and we offer our very best wishes to all three students, their schools and their community.”

The BT Young Scientist & Technology Exhibition is Ireland’s premier STEM event for young people and the 2022 Exhibition will take place virtually from the 12th – 14th January 2022. The Exhibition offers students the chance to become part of a growing alumni of internationally recognised young scientists and technologists and walk away with the coveted perpetual trophy as well as a prize fund of €7,500. Additionally, the overall winner will go forward to represent Ireland at the European Union Contest for Young Scientists in 2022.

For more information on the BTYSTE and for details on how to submit an entry before the deadline of September 27th 2021, log onto www.btyoungscientist.com