Cork County Council are the owners of the stately home known as Mallow Castle, and its adjacent grounds. The Castle was historically owned by the Jephson family. It was sold to an Irish American businessman Michael McGinn in 1984. Cork County Council then purchased the Castle and 30 acres for a reported €1.7 million, in 2010

The Local Authority is branding the grounds as ‘Mallow Castle Park’ and the area is a real gem, being in the heart of Mallow – one of Cork’s largest county towns – and yet feeling almost rural due to the sheer amount of space.

A inclusive playground opened recently. It centres around a bespoke castle-type structure with towers, slides, rope walks, climbing frames and a climbing wall. It also features sensory-rich activities such as sand/water play and tree canopy exploration. 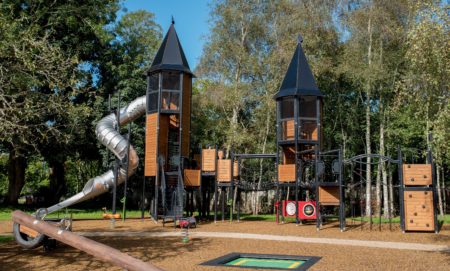 One of the many activity units. Photo by Sean Jefferies Photography. 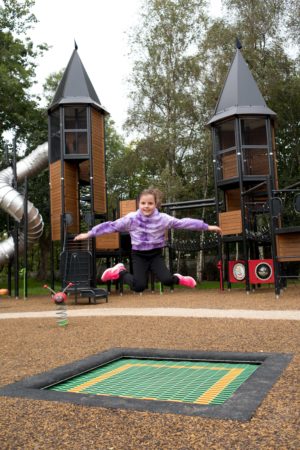 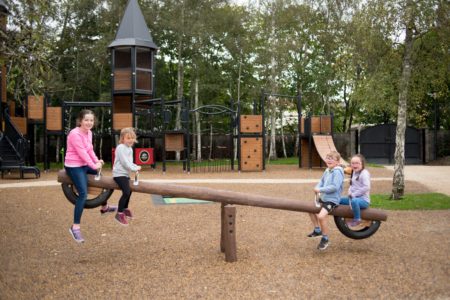 Pictured are Katie O’Grady from Bruree with Emily, James and Ruth Hayes from Ballyagran enjoying the facilities at the new Cork County Council playground in Mallow Castle on 29th September. Photo by Sean Jefferies Photography. 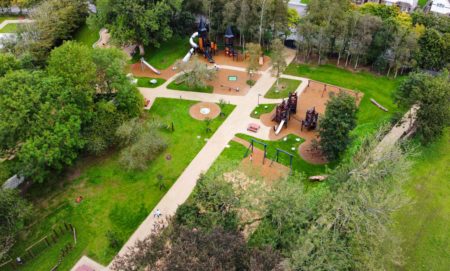 Mayor of the County of Cork, Cllr. Gillian Coughlan said the park will captivate children’s imagination with its fairytale atmosphere, “It is a really impressive amenity and offers a more stimulating and challenging environment for children that is unique to Mallow and the North Cork region. The main structure itself is quite medieval looking which is a nod to its setting in Mallow Castle. I would like to commend all involved in this project which will keep children, from near and far far away entertained for many years.”

Accessible pathways have been constructed from the entrance through the former walled gardens to the grounds of Mallow Castle while a new entrance for both pedestrians and vehicles has been created at the northern boundary with Castlepark. A small car park with space for 28 cars has also been built.

“The new playground forms part of an overall plan to develop Mallow Castle Park as a key tourism destination for North Cork. It’s the first key project in the redevelopment of the existing gardens and historic landscape at Mallow Castle, as well as the main Mallow Town Park, the Spa House and Tip O’Neill Park, as high quality public amenities and year-round visitor attractions. These amenities will complement and support the existing tourism offerings at nearby Doneraile Park and Anne’s Grove House & Gardens.”

Other works undertaken to date include repairs, conservation and restoration works to existing remnant stone walls, walled garden features and glasshouse. New boundary fencing and gates have been erected with new planting within the former walled gardens. Additional signs and seating have also been added.

The project was part funded under the Urban Regeneration and Development Fund with further works being advanced as part of this grant funding have recently commenced in Tip O’Neill Park. It will also complement and support the existing tourism offering at Doneraile Park and Anne’s Grove House and Gardens both of which are in proximity of Mallow.

The playground opened on 1 October The winter opening hours are from 8am to 6pm daily. The development was designed and overseen by Brady Shipman Martin. The construction works were completed by Vision Contracting Ltd.