A €550,000 machine part-funded by two Cork cancer survivors is generating cancer profiles in 24 hours – eliminating an eight-week wait for patients. 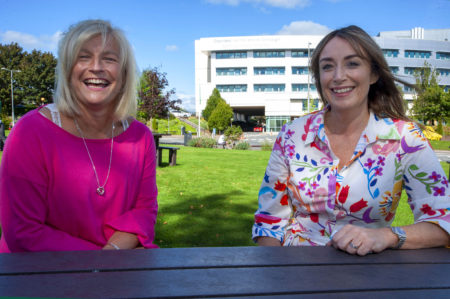 The Ion Torrent Genexus sequencer at Cork University Hospital is the first of its kind in Ireland, identifying the DNA profiles of cancers – which are then used to determine the best type of treatment to fight the disease.

Almost €50,000 was raised during Cork Pink Week in 2019 – organised by friends Miriam Healy and Sylvia McHenry, both of whom survived breast cancer.

Other patients in the middle of harrowing cancer treatment handed over cash to their consultants, asking that it be donated to the major fundraising drive.

“We wanted to raise awareness that breast cancer hits all ages and is affecting people younger than the breast check age of 50,” said Miriam.

“We met with CUH Charity and consultants in the hospital to find out what they needed and what could really benefit patients.

“Following our first event in City Hall, we were able to contribute to the purchase of two high resolution reporting workshop stations for advanced interpretation of mammograms.”

In 2019, the pals launched Cork Pink Week, staging a Business Breakfast and Pink Lunch at Collins Barracks, which raised funds for the new equipment.

“CUH have made us feel a part of the whole process on behalf of the people of Cork, who donate so generously to Cork Pink Week,” said Sylvia.

“The Ion Torrent Sequencer is a tangible benefit to people in the region. It also allows people who have recovered to be tested to investigate the likelihood of their cancer recurring.”

The next generation technology uses sequencing to help speed up cancer testing, enabling patients to start their therapies and clinical trials earlier.

The machine, the single most expensive piece of equipment bought by CUH Charity, is used to identify the DNA sequence of a cancer, which allows consultants to start a treatment plan based on the cancer’s profile.

Previously, this profiling had to be done in the UK, and during Covid, it often took eight weeks to turn around results.

These results can now be delivered withing 24 hours by CUH, bringing immense potential to improve patients’ quality of life and outcomes.

The Karen Fenton Ovarian Cancer Fund raised €80,000 in memory of Karen Fenton, who spent her final weeks in CUH before her death in 2017, aged 43.

Mick McCourt, his family and friends and work colleagues from McAfee raised more than €64,000 in memory of his wife Aileen, who died in 2018.

Prof Seamus O’Reilly of CUH described the Ion Torrent sequencer as an “incredible purchase” and thanked everyone who supported it.

“This equipment truly will make such a difference to patients. The spirit of such events has been incredibly uplifting and morale boosting to all of us who have the privilege of helping cancer patients,” he said.

For more details on how to support CUH Charity and enable it to further invest in advanced technology, see: CUHcharity.ie