Johnson & Johnson (J&J) today announced that the company has entered into a corporate power purchase agreement (CPPA) in Ireland. The eight-year commercial agreement, allied with Johnson & Johnson’s recent execution of three separate virtual power purchase agreements (VPPAs) in Europe, will ensure that the company’s entire operations in Ireland are now powered by electricity from 100% renewable sources 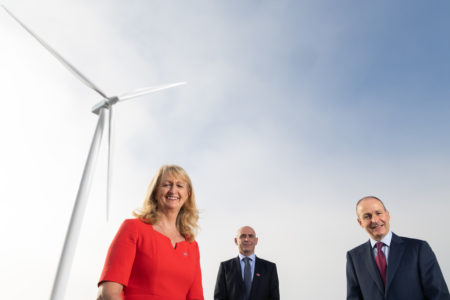 Over the lifetime of the agreement, Ørsted will supply Johnson & Johnson with more than 1TWh of renewable energy from two wind farms located in Kilgarvan, Co. Kerry and Booltiagh Co. Clare. This amount of clean energy is equivalent to avoiding the carbon emissions from more than 136,759 cars on Irish roads, or the electricity consumption of powering 528.8 million smartphones, recycling 134,898 tonnes of waste instead of going to landfill or planting 6.6 million trees [ii]. Additionally, the long-term nature of this PPA makes it possible for Ørsted to invest in its development and repowering strategy to construct more renewable generation in the future.

Highlighting the importance of this agreement with respect to Ireland’s climate goals, An Taoiseach, Micheál Martin T.D. said: “I welcome this announcement of a CPPA between Johnson & Johnson and Ørsted. Johnson & Johnson has embraced its environmental responsibilities globally, but also here in Ireland, and this agreement will help the company to achieve its wider climate goals. We are at a crucial point in the global fight against climate change and initiatives like this should become the benchmark for all companies to aspire to.”

“We are proud to announce that we have reached our target of sourcing 100% of our electricity across our Irish operations from renewable sources,” said John Lynch, Plant Leader, Johnson & Johnson Vision Care Ireland UC. “Across our 10 sites and workforce of more than 5,000 here in Ireland, we are committed to supporting Johnson & Johnson’s climate action goals. In the last decade we have invested more than €60 million in over 80 carbon footprint reduction projects. Today is a major landmark on our journey in Ireland to achieve “net zero” carbon emissions by 2030 and underlines our commitment to ensuring a better, healthier world.”

“As the world’s largest and most broadly based healthcare company, we know that human health and environmental health are fundamentally linked — healthy people need a healthy planet,” said Leisha Daly, Head of Government Affairs & Policy in Ireland and EMEA at Johnson & Johnson. “These new agreements are an exciting milestone in our longstanding commitment to climate action and take us another step closer to our goal of powering our global operations with 100% renewable electricity by 2025 and achieving carbon neutrality in our global operations by 2030.”

The CPPA combined with the Europe VPPA will provide the equivalent of 100% renewable electricity for all Johnson & Johnson property sites across its three business sectors — pharmaceuticals, medical devices, and consumer health — in Ireland.

Johnson & Johnson’s aim to procure renewable power aligns with its Health for Humanity Goals — specifically, its commitment to source 100% of the company’s electricity from renewable sources by 2025 and to achieve carbon neutrality in its global operations by 2030. The company also recently joined the Race to Zero / Business Ambition for 1.5°C campaign with the objective to achieve net zero carbon emissions across its value chain.

CLIMATE CHANGE / ENVIRONMENT, NEWS
US multinational donates €56,000 of IT equipment to community
Previous Post
How To Simplify The Process of Setting Up Your Business In The UK
Next Post
Tweets by @TheCork_ie