The company currently employs 75 staff and that number will grow to 125 by the middle of 2022. Taoiseach Micheal Martin joined Green Rebel to announce the jobs. 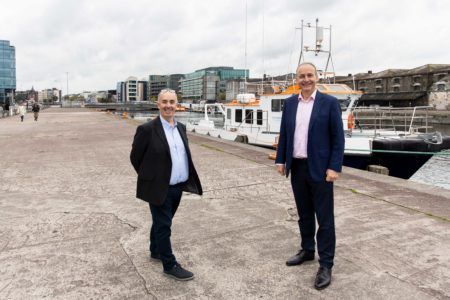 Taoiseach Micheal Martin joins John Wallace, Green Rebel CEO (Left), at Albert Quay in Cork, before boarding the Roman Rebel for the announcement that Green Rebel is to create 50 jobs over the next year.
Picture: Michael O’Sullivan /OSM PHOTO 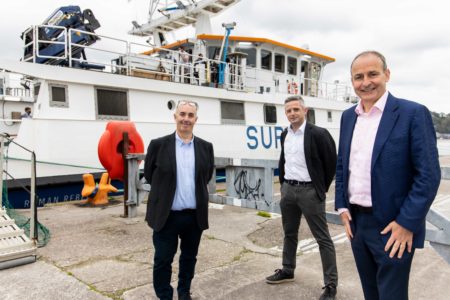 Taoiseach Micheal Martin joins John Wallace (Left), Green Rebel CEO, and Kieran Ivers (Middle), Head of Business Development, Green Rebel, at Albert Quay in Cork, to board the Roman Rebel for the announcement that Green Rebel is to create 50 jobs over the next year.
Picture: Michael O’Sullivan /OSM PHOTO

Taoiseach Micheal Martin said: “I am delighted to join Green Rebel to announce the creation of 50 jobs over the next 12 months. Having seen the technology, met many of the team, and seen some of the Green Rebel data from what is normally our hidden marine environment, I am excited that this team are having such success and innovative plans are in place to drive our supply chain forward and help Ireland become a world leader in the development of offshore wind.”

CEO of Green Rebel, John Wallace said: “We are very excited about our plans to grow and develop Green Rebel over the coming year. The waters around Ireland and further afield are set to become a major source of renewable energy generation and this is an absolutely essential element of effort to combat climate change. The quality survey work being undertaken by Green Rebel right now is designed to both protect the environment and allow wind farm developers to harness its potential. The company operates a growing fleet of state-of-the-art survey aircraft and survey vessels that capture enormous datasets that are processed by a world class team of data scientists across all disciplines. The need for revolution has never been greater and at Green Rebel we are passionate about being a dynamic contributor to help achieve a more sustainable future for all. We are building on a team with great experience and we are looking for people that share this passion.”

Founder of Green Rebel, Pearse Flynn said: “Ireland is on the cusp of a green revolution. With an abundance of offshore wind and water available to us, we can produce real fuel alternatives to help deliver Ireland’s energy transition. Wind generated offshore will play a significant role in providing energy security and helping Ireland become a net exporter of green, renewable energy. Wind generation will bring ashore electricity that can be used either directly into the grid, or feed exciting new green energy solutions provided by our sister company EI-H2, who are looking to produce green hydrogen at sites in County Cork and beyond.”

Green Rebel is headquartered in Crosshaven, Cork and plays a key role in the development of the offshore wind sector. Using their fleet of ships, aircraft and innovative technology, the growing, diverse, and energetic team specialise in the collection, processing, and analysis of marine and ‘metocean‘ data. The company and its team helps accelerate green energy developments in the most sustainable and ecologically responsible manner possible.

Plans for offshore wind farms are at an advanced stage with a number of potential fixed and floating operators examining sites along the Irish coastline. Green Rebel is engaging with all developers to provide world-class data acquisition and processing capabilities on their doorstep.