SOCCER: Cork City FC to wear “No To Racism” Jerseys against Galway United 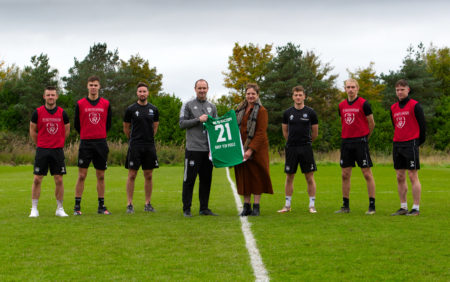 Cork City FC will replace the player names on the back of our jersey with the slogan “No to Racism” for the final SSE Airtricity First Division game of the season against Galway United on October 29th.

Speaking on this partnership, Cork City Community Coordinator Erika Ní Thuama said: “Football is a sport that is open to everyone irrespective of their origin, race, gender or sexuality. Inclusiveness is a part of our overall ethos at the club and we are a diverse club in terms of our staff, players and supporters. We are delighted to partner with Recruit Refugees Ireland who are doing fantastic work on the ground, helping refugees and asylum seekers in their search for employment.”

Roos Demol of Recruit Refugees Ireland said: “Recruit Refugees Ireland is delighted with this support from Cork City FC. Recruit Refugees is one of the projects we run with International Community Dynamics CLG to help refugees and residents in DP centres build bridges with Irish society, by using the talents and skills that they brought with them. We work with sports, music and employment, three ways to integration. The money that we will receive in this sponsorship will go to the Windows for Opportunity Campaign, to buy badly needed laptops for people in Direct Provision, helping them access online courses, job sites and remote work. This sponsorship will make a real difference. Go raibh Mile maith agat!”.

As part of the Show Racism the Red Card campaign, Cork City players Uniss Kargbo and George Heaven spoke remotely with 5th and 6th class students from Glasheen Boys’ School. The players delivered a remote anti-racism workshop and fielded questions from the students.