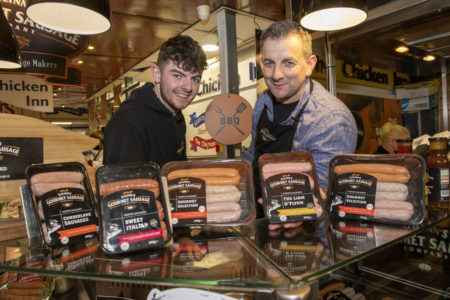 “Distribution is growing every week and we are working closely with the Musgraves, Supervalu and Centra retailers, Dunnes Stores, and Tesco to roll out our products nationwide”, said Declan O’Flynn, owner of O’Flynn’s Gourmet Sausages.

The family-run company produces its products from their factory in Wilton, Cork city. In addition to their English Market stall, they also serve sausage sandwiches from ‘the hatch’ located on Cork City’s Winthrop Street.

Declan O’Flynn, Owner of O’Flynn’s Gourmet Sausages said: “It’s great that the hard work that our family has put into this business over the last number of years is paying off. It really is a team effort. I run the business with my wife, Anne. My brother, Dave O’Flynn works on deliveries and sales and ensures all our customers are happy with what we are producing, whilst my other brother, Stephen works in production and is our chief sausage-maker. My own son, Jordan, has recently become more involved with the business as he manages our social media accounts with the rest of the marketing team.

“We pride ourselves on making high-quality products which are bursting with flavour. In the English Market we have over 50 sausages that we have created ourselves, drawing from food cultures all over the world. Our products range from 70 to 90% meat content, with the rest being made up of spices, herbs, fruits, and vegetables, so it really is a premium product that we are looking to produce.

“Our sales team have started to roll out our sausages across the country, and we hope to be fully nationwide over the next few months.”

Over the last 18-months, the focus of the company has been all about growing their production and retail operations.

“We have significantly invested in both equipment and our staff working in our sausage factory. It’s critical for us that as we grow we maintain the same high standards that we’ve had serving the people of Cork for generations. For us that’s the main thing. We must keep high quality sausage-making at the forefront of everything we do as a company”.

All O’Flynn’s products are made with the finest of meats, spices, vegetables, and fruits, where they draw upon a blend of local and international flavours, producing a premium product that is intended to be used in stews, pasta dishes, pizzas, soups, meatballs, and much more. They also have a traditional breakfast sausage.

“Each of our sausages has its own story”, says Declan. “The Sweet Italian Sausage derives from North America. After the troops came home from World War 2, they craved the Italian sausages they had tried in Italy. Today, it can be found in every corner of the country, each to their own recipe. It even got a cameo in the famous TV show The Sopranos. It is a mix of coarse ground Pork, fennel, sweet dried basil, garlic & paprika. It is a great addition in soups, stews, pasta & pizza and if you remove the casing it can be used as meatballs or it’s fantastic added to a Bolognese sauce.”