The Evolution at the Tills – C&L Epos Systems

BUSINESS NEWS: Till, cash register, cashbox, whatever you want to call it – Where would we be without them? 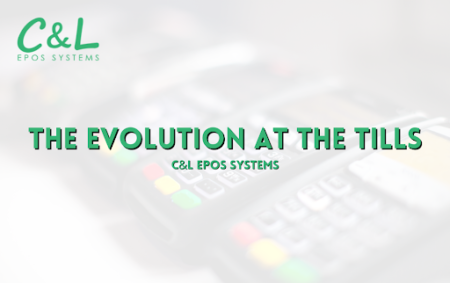 When was the last time you thought about the till in the corner shop or your local pub? It’s something we all take for granted but there is a fascinating history behind these sophisticated drawers.

Did you know that tills and overall Point of Sale systems are something that have been around for the past 140 years? An American saloon owner called James J Ritty crafted the idea in order to stop some of his more sticky fingered bar staff ‘borrowing’ from the till – A simple solution to a problem in Dayton, Ohio would go on to change the landscape of business as we know it.

The past 18 months have seen a similar sizeable shift in the world of POS systems, with the entire world rapidly moving from cash to cashless, ques to table service, QR codes and more.

“In our 30 years in business we’ve seen some big changes but nothing like the past year or so, it’s been fairly seismic for obvious reasons” notes Rory Carroll, Director at Corks own C&L EPOS Systems “The pandemic really changed the entire landscape of things. Usually it was only your larger scale retailers, bars and restaurants that would’ve been fully equipped with cashless tills, handheld ordering payment options, wireless card machines but now even your small pubs and independent shops have to have, it’s become a necessity, everyone in the hospitality trade has had to adopt this sort of restaurant mentality when it comes to service”

“The vast majority of businesses already had all of these systems in place but they just weren’t using them to their full potential. For example, we work closely with the team in Trabolgan, they’ve got a range of vendors out there, five in total, a café, two bars and two restaurants. The holiday village was reopening this summer under the new COVID guidelines and needed to put a rapid and accurate table service option in place in order to ‘beat the queues’ – We went in and set up our myEPOS Online Order system, installing QR Codes on the tables which allows customers to order and pay through their mobile device simply by scanning the code, their order is then delivered to their table. In one of the restaurants in Trabolgan, we combined this ordering system with the use of handheld ordering pads for employees, meaning customers can deal directly with a member of the waiting staff if they wish. It’s a massive change from the way things were only just over a year ago.”

However, it wasn’t all plain sailing –

“Obviously before things opened back up there was a huge influx of enquiries from pubs around the country trying to get ready, but they were constantly battling with changing levels of restrictions, what they were and weren’t allowed to do. This initial rush was paired up with a kind of secondary wave about one month after the grand reopening as a lot of business owners took stock, realised maybe the measures they had in place weren’t working and came back to us looking for a more comprehensive system, handheld units, cloud systems and more.”

Advancements, the Cloud & Beyond

The way in which businesses hold money, create reports and take orders has shifted drastically in the past 50 years. It was actually in the 1970s where the first big leaps were made, when computer manufacturer IBM dreamt up two systems that could control around 128 cash registers, it was actually McDonalds that was one of the first early adopters of such a system and highlighted just how useful these systems could be, by 1974 they had servers connected to networked tills which displayed the entire menu, with a dedicated button for each dish, it also calculated the entire sale for the server. 1992 was the next landmark year, as a supermarket retailer based in California decided to create an Epos system on a Microsoft Windows platform. The 90’s in general saw further huge strides in computing and electronics, with further improved Epos which has lead us to now. The early noughties saw the introduction of cloud-based ePos systems, which meant increased efficiency and options for businesses –

“What we’ve seen in recent years is a large number of those in the hospitality trade looking for a cloud based system, like our myEPOS system, they just make life easier. You can remotely access your businesses systems, see sales volumes in real time, adjust prices, add buttons to the tills or even run VAT reports without even setting foot on the premises.”

Benefits of an Epos systems

Regardless of what type of business you’re running, you’re going to need a solid inventory management system. With an Epos system, your inventory and database is updated in real-time whenever an item is scanned/entered through, volume can be then tracked from the system itself or from the handheld devices you’re using. This is hugely beneficial when it comes to monthly reports as you can accurately monitor overall product turnover and track the amount of goods sold, letting you know exactly when its time to restock.

It also makes day to day management a breeze as all of your sales data is recorded, allowing you to then view this information through graphs, charts and reports. Similarly, income levels and things like tax rates are automatically calculated then saved within the system.

As the Christmas rush looms large on the horizon, time will be of the essence. As ques grow, customers will want their transaction at the counter or bar to be as rapid as they possibly can be. Modern Epos systems can scan products and completely verify transactions in just a few seconds, increasing checkout speed and boosting customer satisfaction levels. Think of all the times clients and customers have asked about stock levels in a store, think of the time wasted trudging to the stock room to manually check the items actual availability, with these ePOS systems you can see stock levels in real-time and check the information directly from the counter.

One of the biggest growing trends across all industries is loyalty programs. Instead of fiddling around with paper cards, stampers and the like, an Epos system can collect client data whilst creating their loyalty card. Gender, age, occupation, nationality, status and more can be requested, meaning that when a client makes a purchase its possible to actually determine what their shopping tendencies are. This means you can then create customised and tailored discounts and promotional campaigns to individual consumers based on their shopping habits.

Perhaps the biggest benefit is just the sheer amount of time and money saved, as tasks that would usually require significant human resources are now adapted and automated, benefiting your bottom line. Epos systems allow you to automate as much of the selling process as you wish, allowing you to place your staff in other parts of the business that perhaps need that more personal touch.

If you’re looking to make a change with your POS systems, get in touch with C&L ePos systems today. Specialising in ePos systems, ICR Touch Software, Cash Registers, Touchscreens, Scanners, Cash Drawers, Receipt Printers and lots more for all of your business requirements.