Cork is a ‘Healthy City’

Originally designated in January 2012, Cork has now been accepted into Phase VII of the European Healthy Cities Network and join Belfast as the only other Irish city currently in the network. WHO Healthy Cities is a global movement working to put health high on the social, economic, and political agenda of city governments. 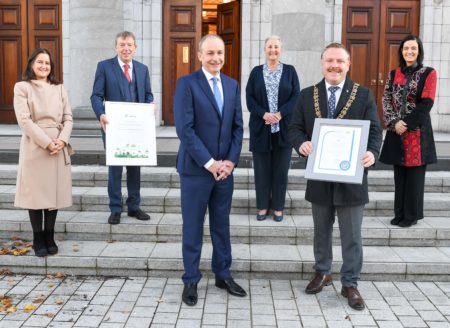 “As the first citizen of Cork City, I am proud to sign the certificate of the designation for Cork as a Phase VII WHO Healthy City,” said Lord Mayor of Cork Cllr. Colm Kelleher. “We are committing to an equitable and sustainable future; one where the health of our citizens and our planet is at the forefront of our policy-making, of our decision-making, and of our priorities in Cork City.”

The designation means Cork City will interact directly with WHO/Europe which will provides political, strategic, and technical support as well as capacity-building for officials in Cork City, to engage local governments in the political commitment to health, institutional change, capacity-building, partnership-based planning, and innovation.

“Cork City has been a pioneering driver of change within the European network,” says Denise Cahill, Healthy Cities Coordinator. “We have been working for 10 years creating healthier urban settings that support the health and well-being of Cork citizens while also playing a supportive role in global efforts for healthy cities. Recent developments in terms of investment in active travel infrastructure and pedestrianisation; the Green Spaces for Health initiative, which maintains existing green spaces and seeks out new greening opportunities, the URBACT Playful Paradigm Project, which uses play and games for promoting social inclusion, healthy lifestyles and placemaking and the PSYCHED Workplace Mental Health Promotion Project supporting staff across workplaces across the city have been recognised by the WHO as exemplars of good practice in Cork City.’”

Ann Doherty, Chief Executive of Cork City Council, stated that Cork City has renewed its commitment to support the implementation of actions at city level relevant to the six P’s of the Phase VII Healthy Cities framework – People, Place, Prosperity, Participation, Planet, and Peace. She said, “In accordance with the needs of the city, based on the City Profile and in consultation with key stakeholders the themes present a platform for collaborative work in which we aim to make a real impact on health and well-being.”

“As the representative for Healthy Cities in Ireland with the WHO European Network, I have witnessed the benefits to Cork of participating in this European network of Healthy Cities,” says Cllr Tony Fitzgerald Cork City Council. “Cities are uniquely placed to play a critical leadership role for health at a social, cultural and political level. Global health issues are dealt with at a local level, and we have been working hard in Cork City with key stakeholders in the pursuit of health and well-being for all. We received specific praise for the political we engaged in Cork City Council which stated that “Cork City Council’s commitment is underpinned by explicit political support and support from key decision-makers.”

“The Cork Healthy Cities Action Plan presents a bold and courageous vision that is necessary, timely, and welcomed, but beyond that, it is achievable,” said Judy Cronin, Chair of Cork Healthy Cities. “It requires intersectoral collaboration with multiple agencies and will require partnership with the WHO.”

The Taoiseach Michael Martin T.D extended his congratulations to the Cork City Healthy Cities Committee. Cork is leading by example nationally, regionally, and globally by continuing to champion the WHO Healthy Cities movement, building networks and relationships, highlighting inequalities, establishing initiatives, consulting on various healthy city topics, and collaborating nationally, regionally, and globally. Good practice examples from local communities in Cork City will continue to be shared with cities across the WHO European Healthy Cities Network.