Baltimore RNLI were called out to provide a medical evacuation yesterday (Thursday 30 December) from Cape Clear Island off the coast of West Cork.

The volunteer lifeboat crew launched their all-weather lifeboat at 9.26am, following a request to bring a doctor to the island and provide a medical evacuation. 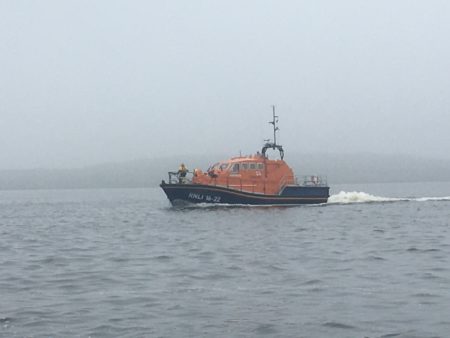 The Baltimore all-weather lifeboat crew arrived at North Harbour in Cape Clear Island at 9.52am The casualty was transferred by stretcher onboard the lifeboat and they departed the Island at 10.05am. The lifeboat returned to the station in Baltimore arriving at 10.30am and the casualty was handed over to the care of HSE Ambulance crew at 10.35am.

There were five volunteer crew onboard the lifeboat, Coxswain Aidan Bushe, Mechanic Micheal Cottrell and crew members David Ryan, Kieran Collins and Jerry Smith. Our station medical advisor, Dr Don Creagh, accompanied the crew on the call. Conditions at sea during the call out were poor with a south westerly force 4 wind, a 2m sea swell and fog with visibility of 1 nautical mile.

Speaking following the call out, Kate Callanan, Baltimore RNLI Volunteer Lifeboat Press Officer said: ‘If you find yourself in a medical emergency whilst on an island don’t hesitate call 999 or 112. On behalf of Baltimore RNLI Lifeboat Crew, Fundraising Committee and the Operations Team I would like to thank everyone for their support in 2021 and wish you all a very happy, healthy and safe New Year.’