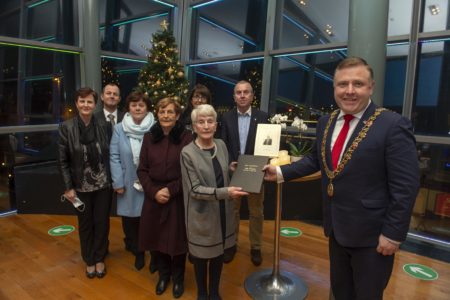 At a special pre-show gathering for the O’Connell family, tributes were paid by Cork’s Lord Mayor, CEO Eibhlin Gleeson, the theatre’s Board Chair Tim Healy and journalist and playwright Declan Hassett. The night’s performance closed with a fitting tribute by Cork Opera House’s current Panto Dame, Frank Mackey. Following last night’s performance, members of Billa’s family, including his wife Nell, were invited to view a permanent display of images featuring highlights from Billa’s career over the years.

Billa began his long association with Cork Opera House in 1947 when he made his debut at that year’s Panto. Over the intervening decades, his name became synonymous with Cork Panto and generations of children grew up enraptured by performances, which consistently drew enormous praise. In later years, Billa was also conferred with Freedom of the City of Cork and an honorary degree from University College Cork.

Speaking at last night’s gathering, Cork’s Lord Mayor, Cllr Colm Kelleher, said: “On behalf of the people of Cork, I am privileged to present Cork City Council’s Book of Condolences in memory of Billa O’Connell to the O’Connell family. The outpouring of affection, fond memories, humorous stories and nostalgia for his performances confirms Billa’s place as a most beloved performer and entertainer in Cork. I am really pleased that Cork Opera House celebrated his life and work through this exhibition and pay tribute to him as Cork’s great entertainer and son.”

The Lord Mayor was joined in his praise by Cork Opera House CEO, Eibhlin Gleeson, who spoke on behalf of the venue’s staff and Panto performers both past and present. “To Nell and the O’Connells, we offer our sincerest sympathies; you have been in our thoughts and we are very pleased to honour Billa this evening.

“References to Billa have been frequent and fond during the production of this year’s panto, so much so that our wonderful cast have paid tribute in their own way by including a picture of Billa in character on the set. Our celebrated panto is built on a long tradition, characterised from the late 1940s to the early 2000’s by Billa’s contribution, at the heart of the panto and his legacy is carried on today by our wonderful dame, Frank Mackey, known and loved as Nanny Nellie.”

Last night’s performance finished with a standing ovation in Billa’s honour, following which Ms Gleeson concluded, “It was an honour for Cork Opera House to call him one of our own”.

AREA: CORK CITY, ENTERTAINMENT, NEWS
Parking fines increase from €40 to €80
Previous Post
LATEST TIMES: Where to get a COVID vaccination in Cork City in coming days?