East Cork based Ballymaloe Foods has joined forces with The Dough Bros Wood Fired Pizza to launch a limited edition pizza kit. It is the latest in a series of collaborations between Ballymaloe Foods and Irish restaurants and producers. 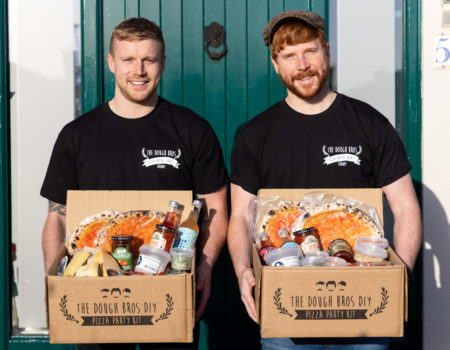 The Dough Bros is located in Galway and was started by brothers Eugene and Ronan Greaney in 2013. Last year, it was named the best pizza takeaway in Europe by 50 Top Pizza, which publishes guides to the best pizzerias across the world. It was also named Top Pizzeria in Ireland.

The collaboration will see jars of Ballymaloe Original Relish or Ballymaloe Fiery Relish included in DIY home pizza kits which can be shipped nationwide.

Donnacha Ryan is the Foodservice Business Development Manager at Ballymaloe Foods. He said, “We’re really excited about the collaboration with The Dough Bros because it’s two family-owned businesses working together. They share our passion about bringing delicious food to customers. It has been an extremely challenging two years for all businesses in the food service industry which is why it’s so important to support each other in whatever way we can.”

Eugene Greaney from The Dough Bros added, “One of the best things since starting our DIY Pizza Kits has been the chance to work with some of the very best of Irish chefs, producers and brands. Ballymaloe Foods is a staple in every home in Ireland so it’s great to get the chance to work with them and use their incredible relishes on our wood fired pizzas. We can’t wait to ship them to people all over the country. We know they are going to love what we have come up with.”

The pizza kits will be available to order from The Dough Bros website from the 17th to the 20th of January and will be shipped nationwide on the 21st of January. Customers can choose from a meatball pizza with Ballymaloe Fiery Relish or a four cheese pizza with Ballymaloe Original Relish, each box will include all the ingredients to make two pizzas. A Ballymaloe branded wooden spoon and two bottles of Kombucha made locally in Galway will also be included. The kits are priced at €36.99 and include free delivery.