Professor JC Séamus Davis, was recently been elected to the rank of Fellow of the American Association for the Advancement of Science (AAAS), considered among the most distinct honours within the global scientific community.

Prof. Davis, a physicist at University College Cork (UCC) and the University of Oxford, is recognised as one of the world-leading experts in the field of macroscopic quantum physics. AAAS is the world’s largest general scientific society and election to the society is reserved for those whose efforts on behalf of the advancement of science, or its applications, are scientifically or socially distinguished. This tradition stretches back to 1874, previous fellows have included Thomas Edison, Maria Mitchell and Ellen Ochoa.

A revolution in computing

Quantum technology is predicted to drive a revolution in computing. Such technology at present relies on superconductors operating at temperatures close to absolute zero, but to become commercially viable, room temperature quantum computing is needed. Prof. Davis’ research has created several novel scientific instruments focused on advancing this field.

Prof. Davis receives the honour of his election to AAAS today for his seminal contributions to experimental quantum physics, particularly for detecting quantum interference of superfluid 3He, for the invention of spectroscopic imaging scanning tunnelling microscopy, and for its use in quantum visualization studies of high-temperature superconductivity.

The astonishing beauty of quantum physics

Obtaining a BSc in Physics at UCC in 1983, Skibbereen native, Prof. Davis would go on to become a global leader in the field of Quantum Matter. Previously Prof. Davis was the James Gilbert White Distinguished Professor of Physical Sciences at Cornell University. In 2018 he joined UCC to spearhead a pioneering research programme to study Quantum Materials for Quantum Technology, in a joint appointment with the University of Oxford. This appointment was supported in Ireland through a Science Foundation Ireland (SFI) Research Professorship and an SFI Infrastructure Award, and in the UK via a European Research Council Advanced Grant Award.

Research by Prof. Davis and his team at UCC and Oxford explores macroscopic quantum physics. Quantum mechanics is a branch of physics with increasingly important applications our technological society and economy. Yet this most fundamental theory of nature often feels as if it is a set of eerie and counterintuitive ideas of no direct relevance to our lives. One reason is that we cannot perceive the strangeness (and astonishing beauty) of the quantum mechanical phenomena all around us by using our own senses.

Prof. Davis has invented new techniques and instrumentation that allow humans to visualize or perceive quantum phenomena directly. These techniques provide humans with direct access to, and thus better intuitive understanding of, the world of quantum physics, just at the time when quantum technology is coming to play a central role in science and the economy.

“I’m thrilled and honoured to join the Fellowship of AAAS and delighted by the recognition for these innovative approaches to exploring macroscopic quantum physics” commented Prof. Davis. 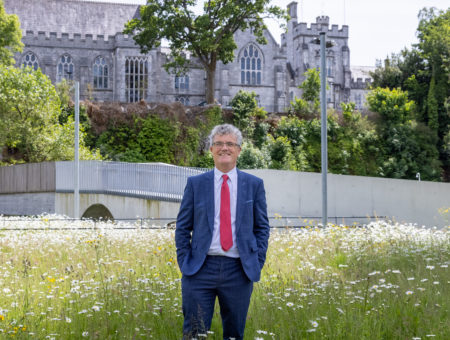 “We are thrilled that Prof. Davis has been elected Fellow of the American Association for the Advancement of Science (AAAS). The greatest accolades are those where peers and learned societies acknowledge and celebrate excellence. To be acknowledged by the AAAS is such an outstanding acknowledgment of his impactful research. We are proud to have such research talent as Prof. Davis in UCC and we look forward to continuing to support him to accelerate his cutting-edge research on quantum technologies.”

Welcoming the announcement, Director General of Science Foundation Ireland, Prof. Philip Nolan, said: “I am delighted to congratulate Prof. Davis on being elected as a Fellow of AAAS. As a distinguished SFI research Professor and alumnus of the SFI St. Patrick’s Day Science Medal, Prof. Davis’ world-leading expertise in quantum physics continues to enhance Ireland’s international reputation for excellence in research and innovation.”

“I’d like to congratulate Prof. Séamus Davis on this prestigious Award which celebrates global leaders in science. It is a fitting honour for someone who has made such important discoveries in the area of quantum physics” commented Prof. John Cryan, Vice-President for Research & Innovation at UCC.