Greenway between Mallow and Fermoy (and maybe even Dungarvan!) could be just the ticket to boost Mallow tourism

The potential Greenway would be developed along a 77.35km stretch of scenic countryside adjacent to the River Blackwater, incorporating stunning scenery and using viaduct crossings at key landmark locations.

The route under consideration would run from Mallow, through to Fermoy, and onto Dungarvan where it could link-in and connect with the existing Waterford Greenway. 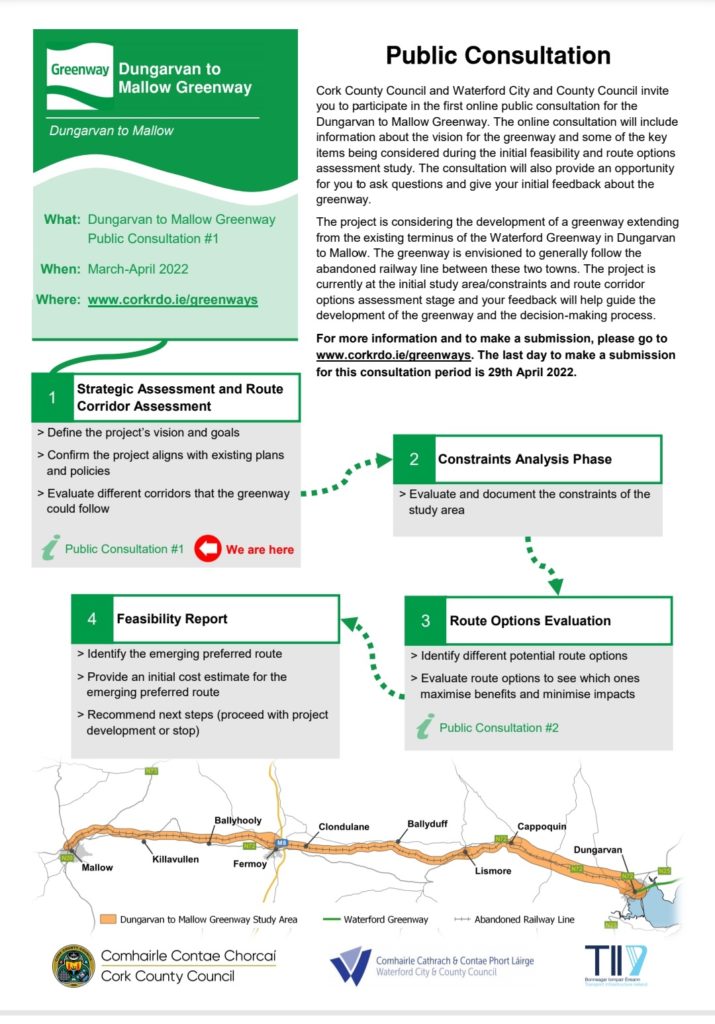 Mayor of the County of Cork, Cllr. Gillian Coughlan, said,

“This project, should it come to pass, would provide a wonderful opportunity to create a vibrant tourist attraction in the north of the county, which in turn could feed into the tremendous success that is the Waterford Greenway. Nature has already provided us with a wonderful backdrop which in itself already draws tens of thousands of tourists every year. Since the pandemic struck, everyone truly appreciates the benefits of being outdoors, and it is incumbent upon us to explore every opportunity to create new and compelling reasons to explore our wonderful county. I look forward to the outcome of the feasibility study.”

“The existing Waterford Greenway has been an unparalleled success since its opening in March 2017. We have witnessed at first hand the transformative effect that a project like this can have on local communities, business and the health & well-being of our people. Here in the heart of Ireland’s Ancient East, Waterford has already been working with Kilkenny, Wexford and Tipperary on Greenway and other outdoor recreation projects. We now look forward to potentially creating further linkages with our near neighbours in Cork through what has the potential to be a very exciting Greenway project.”

Cork County Council will act as the lead authority to carry out the required management responsibilities for the feasibility study, including the formal appointments of project consultants.
Chief Executive of Cork County Council, Tim Lucey, said,

“This feasibility study is the first step in bringing a project like this to fruition. This is an opportunity to develop a strategic, sustainable and captivating Greenway that links the beautiful countryside at the heart of Munster to the scenic coast of Waterford, and beyond. We look forward to seeing the results of the study and would like to thank the Department of Transport for the funding that has allowed us to explore this exciting project in greater detail.”

Having provided services to similar projects in Ireland and internationally, consultancy company Atkins will bring experience from previous projects, including the Royal Canal Greenway and the Baldoyle to Portmarnock Greenway as well as the ongoing Fingal Coastal Way and Boyne Greenway. Kieran Boyle, Technical Director at Atkins, said:

“The Dungarvan to Mallow Greenway Project will provide a new scenic link for local communities and tourists alike to traverse between attractions while enjoying the beautiful landscape. We look forward to collaborating with Cork County Council and Waterford City and County Council to create a new focal point for the region that supports more sustainable travel, encourages tourism, and complements the natural landscape.”

Funding of €361,238 has been awarded to both Cork County Council and Waterford City and County Council by the Department of Transport under the Strategy for the Future Development of National and Regional Greenways to complete the feasibility project.

As part of the initial steps in the development of the feasibility study, the Local Authorities are launching an Online Public Consultation to seek the views of the general public on the Dungarvan to Mallow Greenway. The Consultation will provide information on the vision for the Greenway and other keys details being considered during the initial feasibility route option assessment study. Members of the public are invited to visit www.corkrdo.ie/greenways to submit their comments online. A local awareness campaign will also be undertaken.