The man who cleaned up Cork Harbour

Cork native, Déaglán Healy, was the man in charge of the massive project that put an end to the equivalent of 40,000 wheelie bins of raw sewage being discharged every day into Cork Harbour.

The project included the construction of a new Wastewater Treatment Plant at Shanbally, expanding the sewer network to connect 20,000 homes to the new network and a landmark engineering feat of drilling under the Lee Estuary with two of the longest horizontal directional drills ever carried out in Ireland. These drilled bores allowed the installation of sewer pipelines at a depth of 60m under the Lee Estuary – creating a vital connection between Cobh and Monkstown. Such was the size and scale of the project, it was named Engineering Endeavour of 2021, by Engineers Ireland.

A proud Cork man Déaglán first wanted to pick up an artist’s paintbrush rather than learning the tools of an engineering trade: “In my leaving cert year, I wasn’t entirely sure what I wanted to do after school. I toyed with the notion of doing a degree in fine art but a relative, who was a far more talented artist than I could ever have hoped to be, had gone down that path and was finding it hard to make a living as a full-time artist.”

“One of my older sisters had studied civil engineering and my parents were keen for me to get a qualification that would make me employable anywhere around the world. They suggested that I could always do fine art after engineering if it was that important to me. A school friend had decided to study civil engineering and, seeing as I liked physics and maths, I figured I’d give it a lash! I grew to love the Civil Engineering course at UCC and the only thing I’ve ever painted since is a wall.”

“I am so glad I made that decision; engineers have changed the world. If there were no engineers there would be no internet, when you’d turn on the tap, no water would come out, and Neil Armstrong would never have walked on the moon. Interestingly, nowadays Engineers tend to be taken for granted, I’ve never heard of a celebrity Engineer. Maybe that’s my calling! When I see some new invention, building, or software, I think to myself how did they do that? Invariably it involved a lot of engineering, teamwork and common sense!”

Having joined Bord Gáis in 1994, Déaglan moved to Irish Water in 2013 and began working in Major Projects on the Cork Lower Harbour Main Drainage Project in 2014. Explaining the best part of his job, Déaglan said: “There is such a lot of variety, no two days are the same. There’s always a new challenge to be overcome and it’s great that you can see the fruits of your labour most of the time, as a new building rises from the ground, or as with the Cork Lower Harbour Main Drainage Project, we end the equivalent of 40,000 wheelie bins of raw sewage going into the harbour every day – that’s a harbour that I swim in, my family swim in – so being part of the solution for all the communities surrounding the harbour, makes me proud – as an engineer, as a family man and as a Cork man.

“Funnily enough though, I got the opportunity to attend an evening presentation by the Engineer and Architect Santiago Calatrava when I finished college. Google him and look at the structures he has designed and built. Some of the most beautiful structures in the world. Despite his inspiration, I spent the next 30 years designing and building pipelines, all of which, once completed, are buried underground, more often than not, never to be seen again!” 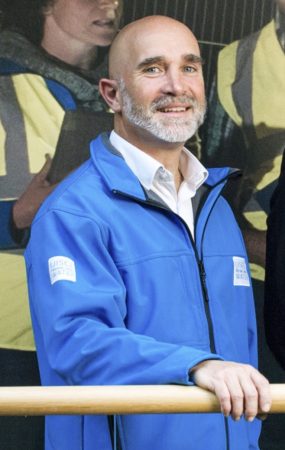 In 2014, Déaglan was appointed project manager for one of the biggest projects ever undertaken by Irish Water – The Cork Lower Harbour Main Drainage Project.

The Cork Lower Harbour project was a great job to work along with more than 500 people working on the project over the years – all great people – and all everyday heroes. From those working on the design of the pipelines, to the amazing feat of engineering that was the drilled crossing under the Lee Estuary, to the great community liaisons that we had throughout each contract that made up the completed project – they explained the upcoming works and worked with communities and businesses to minimise impacts, to the lads on traffic management – that kept the smiles on people’s faces as we invariably had to delay their journeys – every one of them, as well as those living and working around the harbour, were part of the success of the project as we all worked together to clean up our harbour. It was lovely to see the interest that locals had in the project. In Cobh, the contractor held an art competition with the local schools to help them to get involved and understand the works, and the winner Honor, with a fantastic drawing, showing how our work impacted the harbour she loves, is now part of the signage for one of the pumping stations in Cobh – you can’t see the pumping station – but Honor’s painting brings the changes we made to life. Again, I’m proud to be a part of that impact.

Discussing Engineers Week and why engineers are so important, Déaglan said “It’s engineers and scientists that will solve the climate crisis. The living world around us faces imminent peril and it will be the engineers of the future that will lead the way in designing and building technologies that will enable humanity to survive long into the future.”

Advising anyone stepping into a career in engineering, Déaglan added “Surround yourself with other engineers, especially older ones with lots of experience. Pay attention to detail, NASA lost the Mariner 1 rocket because they left a single hyphen out of a line of code. That was a €700 million typo! Learn from other engineers’ mistakes. Codes, specifications, and standards are there for good reason, more often than not, because somebody previously messed up. And always ask questions, lots of questions. Why? Why not?”