Where to dispose of unwanted drugs / medicines?

Unused or out of date medicine can pose a serious danger in the home. Over the next few weeks, Cork Kerry Community Healthcare, together with Cork City Council, Cork County Council and Kerry County Council, is asking the public to use a free service to dispose of their medications safely.

The ‘Dispose of Unused Medicines Properly’ (DUMP) campaign is running until Friday April 22nd with almost all pharmacies in Cork and Kerry taking part. This campaign allows the public to bring unused or out of date medicines to participating pharmacies to ensure that they are disposed of properly. The DUMP campaign has run successfully in Cork and Kerry since 2007. In 2018, more than 280 bins, containing more than four tonnes of medicines, were safely disposed of as part of this important campaign.

Unused or out-of-date medicines can build up in the home for a variety of reasons. Storing these medications long-term is not safe and can result in accidental poisonings, intentional overdose, inappropriate sharing of medicines and environmental damage.

In 2020, the National Poisons Information Centre in Beaumont Hospital received 11,687 enquiries involving poisoning. Over two thirds of these involved children and adolescents (67%) and most poisonings took place in the home (93%).

In 2019, the National Suicide Research Foundation (NSRF) recorded 7,763 hospital presentations due to intentional overdose of prescription or over-the-counter medications. Paracetamol was the drug most commonly taken in overdose followed by a range of prescription medications. Between 2008 and 2017 the National Drug-Related Deaths Index (NDRDI) recorded 3,715 poisoning deaths. Opioids or painkiller medications were most commonly involved in these deaths.

It is critical that medicines are taken as directed by the person for whom they were prescribed and that they are not shared. Sharing medications is dangerous and can result in illness mistreatment, consumption of incorrect dosages of medications, misuse of antibiotics, antibiotic resistance and unforeseen physical illness and side effects.

Unwanted medicines are often inappropriately disposed of by being dumped with other household waste, flushed down the toilet or poured down the sink. These methods of disposal can seriously harm the environment with products ending up in landfill, permeating the soil and entering our food chain and water supply. 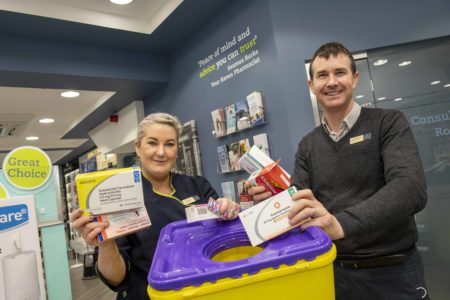 Pictured at Haven Pharmacy Burkes, Macroom who are taking part in the campaign are Pharmacist Seamus Burke and Anna O’Callaghan.
Pic: Brian Lougheed