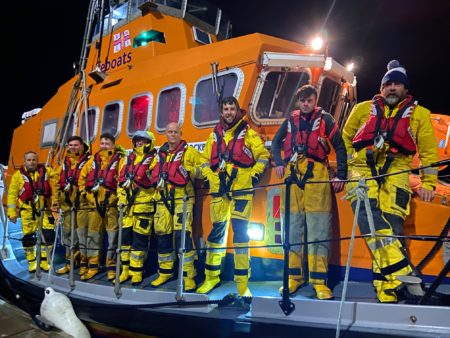 Picture 1 Shows the Lifeboat Crew under Coxswain Mark Gannon after arriving back from the call tonight and picture two shows Station Deputy Launch Authority Philip White and crewperson Conor Dullea who were at the shore search area at Dunworley with other Lifeboat Station officers.

The Courtmacsherry RNLI All-Weather Lifeboat was called out this evening Sunday, April 10th at 7.50pm, by the Valentia Coast Guard Marine Rescue Co-Ordination Centre, when persons on the shore noticed that two surfers appeared in difficulties off Dunworley Strand on the Seven Heads coastline in West Cork and that a Life-raft was spotted in the immediate area at the same time. Within minutes of the Crew bleepers being activated, the Lifeboat “Frederick Storey Cockburn” under Coxswain Mark Gannon and a crew of 7 was launched and headed at speed to the scene of the alert arriving there at 8.20pm. The conditions at sea tonight were very rough with a very strong south-easterly wind and high swells. It was obvious that this could have the potential to be a serious incident and the Coast Guard Unit from the Seven Heads / Old Head of Kinsale, the Coast Guard Rescue 115 Helicopter from Shannon along with Gardai and HSE Ambulance Service were also immediately tasked. The two surfers were able to get ashore themselves after being caught in tough swells and surf off Cow Rock and the concentration from all of the rescue agencies then focused on locating the Life-raft. Following a detailed shoreline search, the Coast Guard land unit spotted the Life-raft on a rocky cliff-face, while the Helicopter and the Lifeboat searched the Bay with their powerful searchlights and heat-sensing equipment. While nobody was found in the Life-raft, the search continued until the Rescue Co-Ordination Centre established that the Life-raft was one that was lost from a Yacht at sea a few days ago off the Cork coast. Thankfully all the rescue agencies were then stood down and the Life-raft was secured and will be taken from the shoreline tomorrow. The two surfers who got ashore earlier were uninjured and made their way home.

The Courtmacsherry RNLI voluntary Lifeboat Operations Manager Brian O Dwyer said “It was great to see the quick reaction of all our volunteers tonight, who dropped whatever they were at and rushed to the station in order to have the Lifeboat underway in less than 10 minutes, to help others in distress. The persons on the shoreline deserve great praise for alerting the rescue agencies quickly, as two different incidents in the same location at the same time was highly unusual”