On a recent visit to Clonakilty, County Mayor, Cllr. Gillian Coughlan, was presented with a copy of the “Clonakilty Town Council 1613 – 2014. A History”, book by the Clonakilty Community Mayor, Anthony McDermott.

Dr. Matthew Potter of the University of Limerick compiled much of the initial information for the publication, but this was added to substantially by Dúchas members Tomás Tuipéar and Michael O’ Mahony who undertook years of important research and sourced many photos for the book.

A limited number of copies of the book were published in December 2021, and are almost sold out. 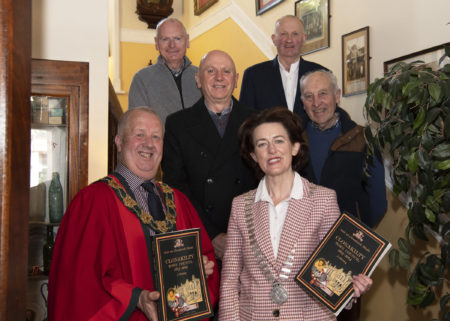 Mayor of the County of Cork Gillian Coughlan with Anthony McDermott, Mayor of Clonakilty with their copies of the History of Clonakilty Town Council 1613 to 2014. Also included are Cionnaith Ó Súilleabháin, Tomás Tuipéar, Tim Feen and Michael O’Mahony. Photo: Martin Walsh.