Why wasn’t the Irish version of ‘Deal or No Deal’ a hit? 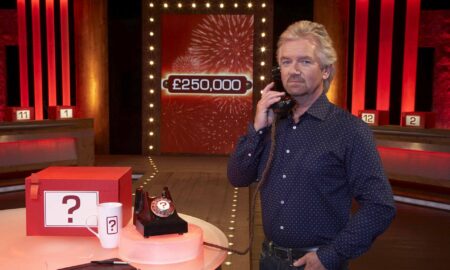 Entertainment: Noel Edmonds hosted the UK version of the show

Everyone’s familiar with the classic box-opening game in which players face off against the banker as they eliminate various monetary values from a giant screen. Deal or No Deal began as Miljoenenjacht in the Netherlands, but it sprouted countless versions, with the UK offering being among the most iconic.

Ireland had its own Deal or No Deal, but it only lasted a few months. It seems strange that this offering wasn’t a hit, as adaptations of the game show in other corners of the entertainment industry have been hugely popular over here.

Deal or No Deal Casino Games are Huge in Ireland

All of the plentiful titles featuring the world-famous brand make players feel as though they’ve entered an episode of the game show. The simple rules are easy to follow, and most people can pick the games up even if they’ve never watched the series.

Irish Version of the Series Lasted a Few Months

The Irish version of Deal or No Deal was shown for the first time in the country on TV3 in November 2009. It didn’t last for more than one series, however, and ended in March 2010. Players were able to earn their chance to appear in the show by purchasing scratch cards from the National Lottery.

As well as using the tried and tested formula that had made Deal or No Deal a global sensation, the Ireland iteration featured Keith Barry as the host. The magician and hypnotist is something of a national treasure, and he was the perfect choice for the show’s lead.

The reason for its discontinuation was to do with poor viewing figures. This wasn’t the first time an Irish adaptation of a popular game show had failed. It happened in 2001 as well, when Eamon Dunphy hosted an Irish version of The Weakest Link. That was axed after one series as well.

Game Show is One of the Most Successful Franchises Ever

Irish viewers are probably most familiar with the UK version of Deal or No Deal, which was an unprecedented success. It ran for more than 3000 episodes between 2005 and 2016, and revitalised Noel Edmonds’ career. It was one of the most successful game shows in Channel 4’s history and, as the Guardian notes, many viewers were disappointed when it was eventually cancelled.

The USA offering was also extremely well received. The American version was presented by Howie Mandel and ran from 2005 to 2019. TV Series Finale reported how it was axed and revived on numerous occasions. There were just over 600 episodes in total, as it wasn’t aired as frequently as the UK offering.

Sometimes adaptations simply fail to strike the right chord. The Irish Deal or No Deal was an example of that. Still, anyone who enjoys the themes of the series can still experience them at online casinos.

ENTERTAINMENT, NEWS
PRIVATE PROPERTY: Your chance to visit the Old Head of Kinsale working Lighthouse
Previous Post
How to Start Day Trading in Gold
Next Post
Tweets by @TheCork_ie