Coxswains from Dunmore East, Rosslare Harbour, Kilmore Quay and Castletownbere (West Cork) RNLI have been presented with gallantry awards by His Royal Highness (HRH) The Duke of Kent, in recognition of their lifesaving roles in rescues off the coast of Wexford and West Cork.

The Duke – the RNLI’s President – attended a lunch for a number of volunteers and employees and their partners at St James’s Palace in London on Friday (27 May), during which four Irish Coxswains were presented with the RNLI Bronze Medal for Gallantry.

Mark Dowie, RNLI Chief Executive said: ‘First awarded in 1824, RNLI Medals for Gallantry are the highest honours bestowed by the charity. They are awarded for saving life at sea and celebrate the courage, skill and dedication shown by our charity’s lifesavers.

‘To receive their awards at St James’s Palace from The Duke of Kent is an honour and as the charity’s chief executive, I am humbled and proud of all our volunteers and employees that make up this incredible institution. Every one of them and their families give so much to the charity and our purpose of saving lives at sea.’

Castletownbere RNLI Coxswain Dean Hegarty was presented with a Bronze Medal for Gallantry for his part in the dramatic rescue of a fishing crew in October 2018. In challenging conditions, the Castletownbere crew saved the lives of six fishermen. A local presentation on a future date will see the crew involved receive RNLI framed Letters of Thanks.

The rescue of the six men who were the crew of the 25m fishing vessel, Clodagh O, took place on the evening of 10 October 2018 at an area known as The Pipers immediately south west of the harbour entrance at Castletownbere. Answering an urgent Mayday from the fishing crew, the lifeboat launched in darkness into a Force 9 gale, driving rain and heavy squalls, to rescue the crew who were in grave and imminent danger due to their vessel having lost all power after their propeller became fouled on their fishing gear.

Arriving on scene, the lifeboat crew saw that the fishing vessel was located in a precarious position and Coxswain Hegarty made the decision not to take the crew off the boat but instead establish a towline in breaking 4-5m swells.

With the weather deteriorating, there was only a short window of opportunity to save the men before the vessel would hit the rocks or cliff face and be lost. With the Coxswain skilfully manoeuvring the lifeboat into position and holding it steady in mountainous seas, the lifeboat crew on deck established a tow on first attempt. The Coxswain had to initially steer the lifeboat out to sea to gain a safe separation between the rocks and cliffs before he could then turn the lifeboat and start the journey back to the harbour. The tow was carried out at a speed of a half a knot in case it parted, only gathering speed as they found shelter. Once inside the safety of the harbour two local tugboats helped to secure the boat alongside the pier.

RNLI Coxswains Eamonn O’Rourke from Rosslare Harbour, Eugene Kehoe from Kilmore Quay and Roy Abrahamsson from Dunmore East were also presented with Bronze Medals for Gallantry on Friday for their role in a rescue in 2020 that saved nine lives and prevented a 100m cargo vessel, carrying 4,000 tonnes of coal, from hitting rocks at Hook Head. The volunteer lifeboat crews who responded to the call out will each receive Medal Certificates.

On 20 October 2020, Dunmore East RNLI, Kilmore Quay RNLI and Rosslare Harbour RNLI, along with Rescue 117, conducted a joint rescue operation off the Wexford coast. The Lily B had lost all power, just two nautical miles from Hook Head. Conditions on scene were force eight with severe force nine gusts and wave heights between eight and ten metres. The Lily B was drifting and in danger of striking rocks on Hook Head or capsizing in the heavy seas.

The 12-hour service in challenging conditions saw multiple attempts by the lifeboat crews involved to establish a tow between the casualty vessel and the lifeboats. With the crew of the Lily B unable to stay on deck for long in the poor conditions and with language difficulties, two of the lifeboats were eventually successful in passing a rope on deck by using a rocket line and pulling the cargo vessel clear of the rocks. The lifeboat tow was maintained for three hours with waves continually crashing over the decks until the tug vessel Tramontine from Waterford Port arrived on scene and took up the tow. The three lifeboats stayed with the Lily B until they reached the safety of the Waterford Estuary. 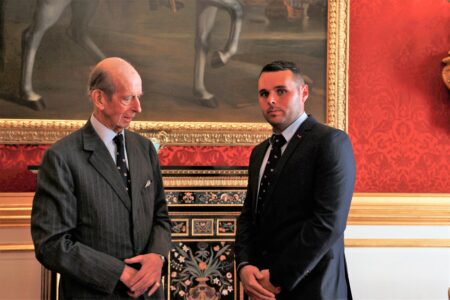 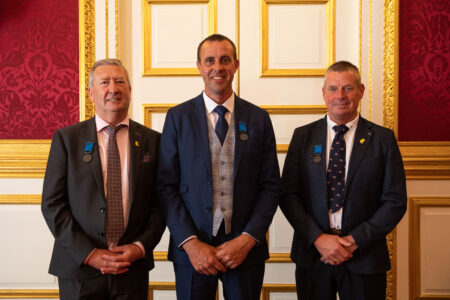 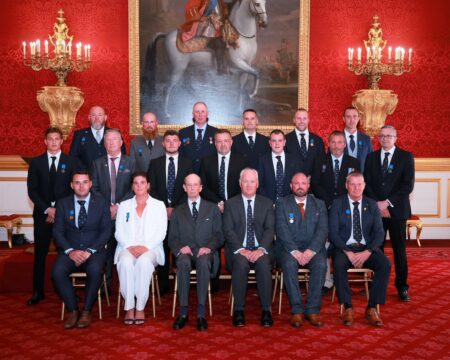 During the ceremony, Coxswain Eamonn O’Rourke was also accorded a vellum for his role during a Storm Ophelia rescue in 2017 in hurricane conditions described by the crew as some of the worst they had ever witnessed. The crew battled 10m seas in force 12 conditions to save three lives. The Rosslare lifeboat crew involved will each receive Vellum Service Certificates.

At 10am on 16 October 2017, a Mayday was received by the Irish Coast Guard from the skipper of Second Love, a 10m Dehler yacht, in serious trouble en route from the UK to Malahide. With conditions deteriorating rapidly the crew were struggling to keep control of the yacht. They had planned to berth in Rosslare but decided to head to Arklow in a bid to outrun the weather. Rosslare Harbour RNLI lifeboat was launched, and the rescue lasted four hours in severe weather and sea conditions. In what proved a vital course of action on the day, a decision was made to pass a drogue (a device trailed behind a vessel to slow it down in rough conditions) to the casualty yacht and then establish a tow to bring the vessel to safety.

Commending those who received awards on Friday and those who will receive awards locally, Anna Classon, RNLI Head of Region for Ireland, said: ‘The RNLI does not give out awards for gallantry lightly and to receive one is a great privilege. Everyone in the region is extremely proud of our lifeboat crews involved in these three rescues for their brave actions that together saved the lives of 18 people.’