#INDIE22 music festival announces @the2johnnies & The Junior B All Stars

Tickets are available now at www.indiependencefestival.com

Following on from a sold out show at the 3Arena INDIE22 brings a fantastic addition to an already incredible line-up set for Cork, this summer – game-changers The 2 Johnnies & The Junior B All Stars join headliners Fatboy Slim, Rudimental and Bastille for the return of INDIE to Mitchelstown from July 29 – 31. 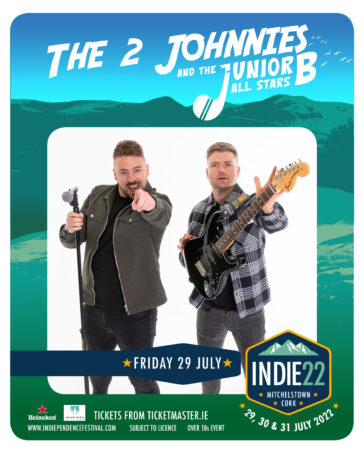 With limited Sunday and weekend tickets available, legendary UK DJ, Fatboy Slim, will play INDIE for the first time while award-winning Drum & Bass act Rudimental will play their first-ever show in Cork at the festival. Bastille have already established themselves as firm live favourites at INDIE, having delivered memorable performances in 2013 and 2019.

Legendary Irish DJ, Jenny Greene of 2FM is already announced as the main headliner for the new Dance Arena and she will be joined by Tracy Clifford, Fergal Darcy, Stevie G and Dec Pierce’s Block Rockin’ Beats over the weekend as well as rising stars like Belters Only, Declan McKenna, 49th & Main, and Cork drill artist JRilla.

INDIE22 is delighted to announce a partnership with Travel Master. Travel Master is a licensed Concert Travel bus & coach service operating high-quality coaches to major venues in Ireland. Offering reliable return travel with drop off and pick up outside the venue getting weekend visitors and day visitors to INDIE22 safely while leaving the car at home. Taking the hassle out of travel it is the safest, most cost-effective way to travel to events, with a simple online booking method. Book your tickets here travelmaster.ie.

INDIE began life in 2006 around Mitchelstown’s venues and Market Square, and its move to a new site on the outskirts of town in 2010 put INDIE on the international festival map – attracting artists such as Manic Street Preachers, Public Enemy, Biffy Clyro, Lewis Capaldi, Bastille, Basement Jaxx, De La Soul, Tom Odell, Editors, The Dandy Warhols, to play alongside some of Ireland’s finest live acts including The Coronas, Hozier, Kodaline and Lyra.