Limerick Band ‘Hermitage Green’ to perform for a second date at Seachurch, Ballycotton

Hailing from Limerick, the popular Irish folk rock group made up of five members including former Munster rugby player Barry Murphy, Dan Murphy, Darragh Griffin, Darragh Graham, and Dermot Sheedy have been quickly making a large impact on the music scene in a short space of time.

Following the release of their first full length album via SONY Ireland, which saw tracks such as ‘Quicksand’, ‘Not Your Lover’, and ‘Save Your Soul’ climb the charts, Hermitage Green has been touring internationally playing to sold out shows all over Ireland, the UK, the Middle East, Australia, and the US. 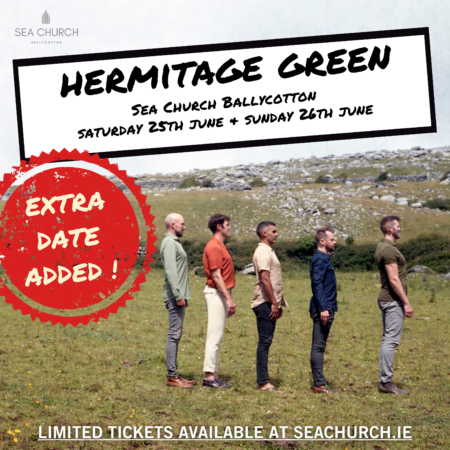 Having sold out one date already at Seachurch, and due to popular demand the breathtaking venue has added a second date for the 26th of June. This will be the first time the band has played at the Ballycotton venue.

Having joined together as a band for over ten years now, Hermitage Green have produced their latest EP back in 2019 with Grammy Award Winning producer, Matt Lawrence who has previously worked with renowned artists such as Adele, Amy Winehouse and Mumford and Sons.

As one of the country’s most beloved groups, and incorporating banjos and bodhráns into their folk pop sound, BackSeat Mafia has said that “Hermitage Green showed once again why they are regarded as one of the best live bands in the country”, while HotPress have called their recent album, ‘Hi Generation’ to be “Like a strong festival set, the sound is largely uplifting and escapist, embracing an alt-rock edge on ‘Heaven’, while also exposing a raw underbelly on tracks like ‘Enough’”.

The band certainly knows how to win over a crowd with their soulful sound. Tickets are available for their second live performance at Seachurch on their website www.seachurch.ie for €39.90. Doors will open at 8pm for the 8:30pm show.