A well-known Hotel on Mac Curtain Street is celebrating 125 years at the centre of Cork life. In an earlier era before the establishment of 5-star Hotels, the Metropole Hotel welcomed Oscar-winning actors, producers and directors, Nobel laureate writers and grammy award-winning singers.

It was designed by architect Arthur Hill and built to the highest standards and opulence of the day by John Delaney and Co Builders. The Metropole was owned by the Musgrave family of merchants until 1977 when it was sold to a consortium of local businessmen. Today it is part of Trigon Hotels and employs more than 100 people.

Over the years the Metropole has hosted many thousands of weddings and is even reported to have hosted King Edward VII for tea on the roof when he visited Cork in 1903 for the city’s Great Exhibition. It was a ‘dry hotel’ for several decades and was advertised as “Ireland’s Finest Unlicensed Hotel”.

The Metropole made headlines around the world in the 1950s when British actress Dawn Addams stayed there. She visited the city in 1957 for the Cork Film Festival which was screening her film ‘A King in New York’. Her requests for a bath of milk were refused by the hotel manager Douglas Vance as the people of Cork were finding it hard to make ends meet at the time.

The Metropole is also responsible for the Cork Jazz Festival which has grown into a world-renowned annual event. It was founded by Sales and Marketing Manager Jim Mountjoy in 1978 and has attracted well over a million people to Cork on the October Bank Holiday weekend since then.

Commenting on the 125th anniversary, Managing Director of Trigon Hotels Aaron Mansworth added, “It is a huge milestone to reach 125 years in business and that is in no small part to the thousands of people who have worked at the Metropole Hotel over the last 125 years. People like Douglas Vance who was General Manager for 38 years from 1944 until he retired in 1982. He transformed the hotel into the top-class venue it is today introducing the highest standards of service and cleanliness. We count ourselves incredibly lucky to have such dedicated and loyal team members working with us today, many of whom have been at the Metropole for decades.”

To mark the 125th birthday, the hotel has launched a new cocktail menu giving a nod to the history and nostalgia of the hotel. It is also showcasing the history of the hotel with new displays and will be running tours for guests throughout the summer.

General Manager Roger Russell added, “The Metropole has a fascinating history and one we’re really proud to celebrate. I hope that guests will find it as interesting as we do. Cork city has vastly changed over the years but the Metropole remains a constant. We have welcomed huge movie stars, famous singers and writers but every guest is special to us. It is wonderful to see generations of families return year after year celebrating the important milestones like christenings, weddings and anniversaries and I hope it will continue for another 125 years more.” 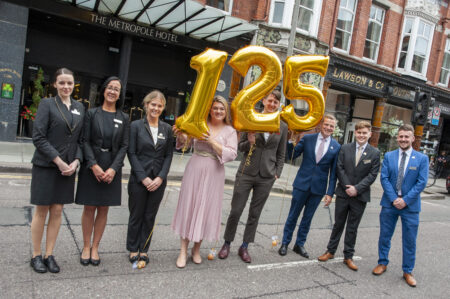 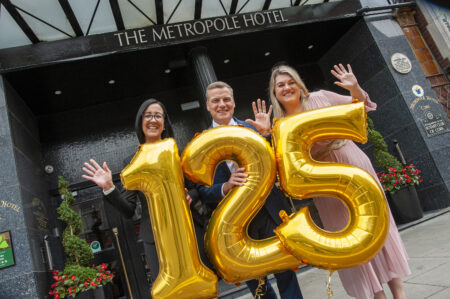