AIB have announced in the last couple of days their intention to remove cash services, including ATMs and cash drop safes, from 70 towns across Ireland, or 42% of its entire branch network. This unilateral action by a bank 68% owned by the state, who made €645m in after-tax profits in the last year could have more serious consequences for smaller and more rural towns in Cork. These downgrades in services are due to be implemented on the 30th September and 21st October 2022.

Of the 70 branches with cash services being removed Cork is the hardest hit with 18.5% of the closures are in Cork County when compared to 10% in Galway, 8.5% in Dublin, 8.5% in Kerry, 4 % in Waterford and 3% in Limerick. Where counties like Dublin are well serviced with bank machines and access to cash services, locations like West Cork, Kerry and Galway along the Atlantic seaboard are going to be hardest hit. 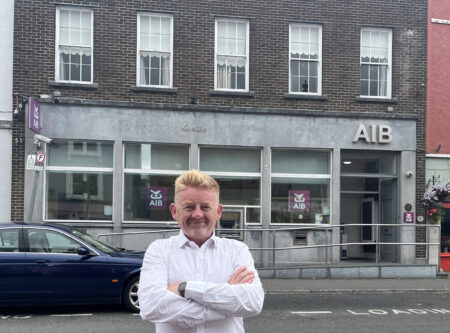 In West Cork town’s like Castletownbere, Dunmanway, Kanturk and Kinsale are all about to have access to cash services removed. Where AIB is claiming that there will be access to some cash services from An Post, this will be limited and ATMs are not being replaced at An Post locations.

This is going to have a serious impact on the tourism and business industry as well as older people who have less mobility. ATMs will start to disappear from Main Streets across the South and West of Ireland, leaving some access to ATMs in shops or hotels. However, this will be limited; meaning people will not have access to cash from an ATM machine outside of business hours and subject to resupply.

The residents of Kinsale have expressed shock and dismay with this sudden announcement and local Green Party representative Marc Ó Riain and Cllr Sean O’Donovan (FF) have both expressed their concern. Marc Ó Riain has started a local petition to retain AIB cash services in Kinsale which has 200 signatories in one day.

He is encouraging local businesses and residents to get in touch with AIB to express their own concerns.

”This is a growing town, 40% of an increase in population is anticipated in the coming 5 years according to the most recent development plan. We are a tourist town and our current ATMs often run out of money on a summer weekend. The removal of ATMs is going to drastically impact tourism as An Post does not have a plan for replacing these ATMs, and in-store ATMs (which often run out of cash on a Friday evening in Kinsale) will not be available to anyone outside of business hours. Businesses depend on cash drop safes for lodgements of takings and these are being removed from AIBs. Businesses will face further charge increases of €2 per €100 to lodge or withdraw coin, a 450% increase on the existing charge.

This is going to further undercut services, especially along the southern and western seaboard. We feel that we are being unfairly targeted by a company of which the state, we the people, are 68% Stakeholders and who are massively profitable. This is an attack on our community and although in the past the State have vowed not to intervene in the commercial operations of AIB, perhaps it should trigger a consent-consultation process under the relationship framework agreement 2017 it holds with AIB on this matter.”

We the people call on the Minister for Finance to step in on this urgent matter.