Iarnród Éireann has today published details on the proposed twin tracking of the 10km section of the rail line between Glounthaune and Midleton, East Cork. 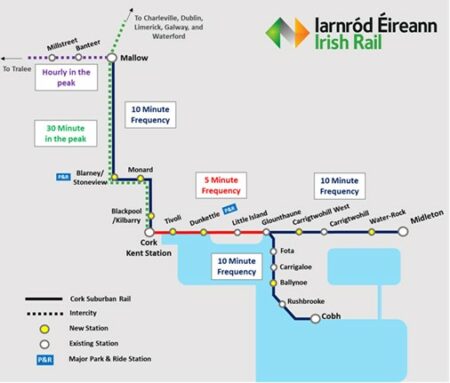 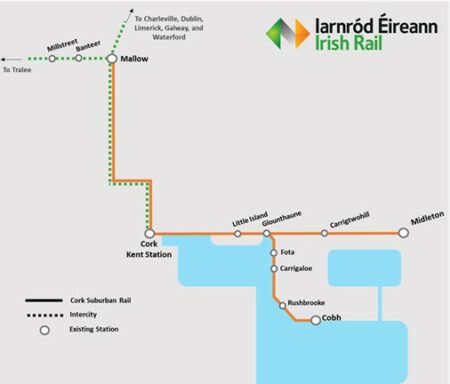 Part of a greater package of improvements being delivered by the Cork Area Commuter Rail Programme under the Cork Metropolitan Area Transport Strategy (CMATS) 2040, these enhancements will provide for a potential tripling of service frequency, enhanced reliability, and an increase in passenger capacity for Cork rail users.

The delivery of this project along with the completion of the new Kent Station through-platform, proposed signaling and communications upgrades and the delivery of additional rail cars, will facilitate:

Having announced a doubling of off-peak services from Cork to Cobh/Midleton earlier this month, the progression of the Glounthaune and Midleton Twin Tracking project to public consultation is the next step in the delivery of the Cork Area Commuter Rail Programme and the realisation of CMATS.

The National Planning Framework (NPF) 2040 anticipates that Cork will become the fastest-growing city region in Ireland, with a projected 50-60% increase in its population by 2040. An enhanced rail network will not only support local population and economic growth but will also assist in reaching Ireland’s ambitious climate change targets and the development of a more climate resilient society.

Minister for Transport Eamon Ryan TD said, “This proposal will deliver exceptional benefits for customers across the Cork Metropolitan Area, enhance service for communities along the line with a tripling of frequency leading to the potential of six trains per hour per direction. Increases in capacity, connectivity, and reliability will encourage the usage of public transport going forward and is especially welcomed as the area has projected population increase of upwards of fifty percent by 2040.”

Chief Executive of the National Transport Authority, Anne Graham, said: “It’s great to see this project being progressed and thanks to these plans, service levels will improve dramatically. Increased frequencies will make it easier to get around and will open up this part of East Cork to greater numbers of locals and visitors alike.

“Investment in rail was a key component in the CMATS strategy, published in 2019. This is a clear signal of intent on the part of NTA and Iarnród Éireann that delivering for the people of Cork by implementing the Strategy is now the priority.”

Jim Meade, CEO of Iarnród Éireann said, “Twin tracking between Glounthaune and Midleton, along with the broader package of improvements that are planned for Cork, will significantly enhance and improve the existing rail infrastructure offering public transport users in the area a more efficient and reliable rail service. This is another milestone in the decade of delivery for Cork’s passenger rail network and I encourage everyone in the area to view the proposals and make a submission.” 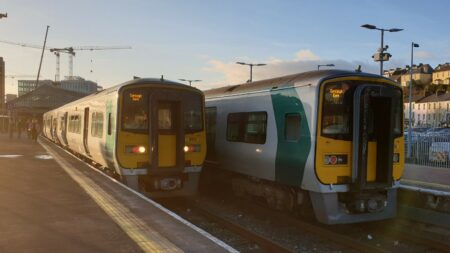 Public Consultation on the Glounthaune to Midleton Twin Tracking Project is live from 26th July to 16th August 2022. During this time, members of the public and interested stakeholders are invited to submit observations on the proposed plans.

There will be two public information days where people can learn more about the project and meet with members of the project team.

All project information including how to lodge a submission, an information brochure and project drawings are available on the project webpage.

‘My Open Library’ funding for Macroom
Previous Post
When will Killavullen Boil Water Notice end?
Next Post
Tweets by @TheCork_ie