Michael Collins was shot near Béal na Bláth on 22 August 1922 – Each year there is an oration at ‘The Monument’, Glannarouge West, Bealnablath, Co Cork. This year is the centenary so it will be a well-attended event with both the Taoiseach and Tanaiste speaking

This year is the centenary of the death of General Michael Collins. This Sunday, 21st August 2022 at 3pm there will be two orations, which will be given by Taoiseach Mícheál Martin T.D. (FF) and Tánaiste & Minister for Enterprise, Trade & Employment Leo Varadkar T.D. (FG). The commemoration will be broadcast live on the RTÉ News channel.

Often referred to as ‘The Big Fella’, Michael Collins is a key figure in Irish history

It’s anticipated that large crowds will attend this year’s commemoration event. As a result, and for your health and safety, a traffic management plan will be activated on the day, in co-operation with An Garda Síochána.

A temporary road closure will be in operation. There will be strictly no vehicular access and no parking at the monument, or on any of the approach roads to the monument.

Those attending will be required to park in a designated parking area and walk to the monument, a distance of 900m approx.

No seating will be provided.

Organisers advise attendees to dress appropriately for the weather, and bring water.

The ceremony will commence at 3pm.

A Park and Ride facility will be in operation on the day for those travelling from the North and East of the country, via the N22.

The Park and Ride will operate from Crookstown village, in the field opposite the Post Office. Gardaí and Stewards and will be there to direct cars and control parking. It will be well signposted.

Cars from the South and West and those travelling through Macroom, should arrive via Kilmurray and will be directed to parking pitches. Please follow all event signage.

As parking is limited, the organisers strongly encourage car pooling.

All cars must be parked before 1:30pm.

The organisers ask you to please adhere to all advice and instruction of Gardaí and stewards, and to follow all signage. 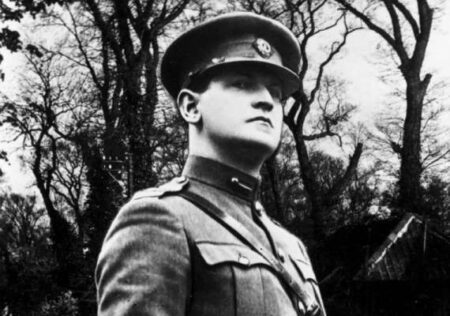 Béal na Bláth or Béal na Blá or Bealnablath or Bealnabla is a small village on the R585 road in County Cork, Ireland. The area is best known as the site of the ambush and death of the Irish revolutionary leader Michael Collins in 1922.

On 22 August 1922, during the Irish Civil War, Michael Collins, Chairman of the Provisional Government and Commander-in-chief of the National Army, was killed in an ambush here by anti-treaty IRA forces while travelling in convoy from Bandon. The ambush was planned in a farmhouse in Béal na Bláth close to The Diamond Bar. Commemorations are held on the nearest Sunday to the anniversary of his death.

A monument was unveiled (2nd August 1924) by WT Cosgrave (1880-1965) and General Eoin O’Duffy (1890-1944) and its inscription reads: “Micheal ÓCoileáin d’éag 22adh Lughuasa [sic] 1922”. It is on a local road which was a dirt road when Collins was shot. Today there is a tarmaced inlet allowing cars to park opposite. A small white pillar marked with a cross, located just to the right of the steps, marks the exact spot where he fell.