Queen Elizabeth II, the UK’s longest-serving monarch, has died at Balmoral aged 96, after reigning for 70 years. Her family gathered at her Scottish estate after concerns grew about her health earlier on Thursday. The Queen came to the throne in 1952 and witnessed enormous social change. Her eldest son, Prince Charles, will now become “King Charles III”, and the head of state for 14 “Commonwealth realms” including Canada, Australia and New Zealand. He said the death of his beloved mother was “a moment of great sadness”. In a statement, His Majesty the King (as he is now officially known) said: “We mourn profoundly the passing of a cherished Sovereign and a much-loved Mother. I know her loss will be deeply felt throughout the country, the Realms and the Commonwealth, and by countless people around the world.” 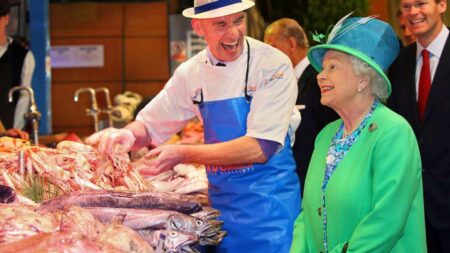 Britain’s Queen Elizabeth who died today. The British Monarch visited Cork City, Ireland – where she met fish monger Pat O’Connell at the English Market – on May 20th, 2011. Her Irish itinerary included other Cork locations including the Tyndall Institute. Photograph: Maxwell’s/Pool.

“I have learned of the death of Her Majesty Queen Elizabeth II with great personal sadness. Queen Elizabeth’s sad passing marks the end of an era. She epitomised that generation of British people who endured the Second World War with both bravery and stoicism. Her long reign, the longest in British history, saw profound change affecting virtually every aspect of politics and society. Throughout her reign, the Queen was a constant and reassuring presence in British life.

“Her historic visit to Ireland in 2011, the first by a reigning British monarch since our independence, was a critical step in the peace process and helped to move British-Irish relations to a new level. The warmth and spontaneity of the Queen on that occasion touched all those she met. So did her generosity of spirit and her commitment to reconciliation on these islands. On behalf of the Government, I was privileged to welcome her to the English Market in Cork and to witness how much that visit meant to her personally and to the people of Cork.

“Through our Embassy in London, I have conveyed deepest sympathies to His Majesty, King Charles, the Royal family more generally and to all the British people on their sad loss. While they grieve that loss, they also can give thanks for a long life of public service lived to the full with immense dignity.”

“On behalf of the people of Cork I would like to extend my deep sympathies to the British Royal family and the British people on the passing of Queen Elizabeth II”.

“Throughout her extraordinary 70 year reign, the Queen was respected across the globe for her selfless life of service and unwavering sense of duty. Her decision to make a state visit to Ireland, and Cork, was one of the most impactful and significant milestones in Anglo-Irish relations since the foundation of the state and a cherished and warm memory for many of us. Ni bheidh a leithead ann arís,” she said.