ENTERTAINMENT: A play about 2 strangers stuck in a Cork pub 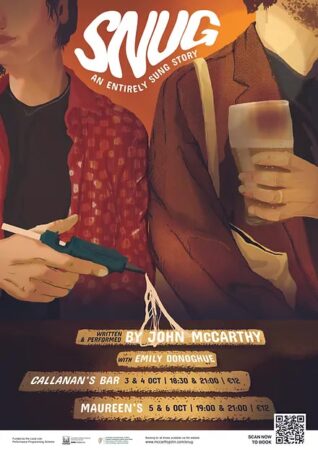 SNUG is an entirely sung story about two stuck strangers – in a pub. Featuring live music in two of Cork’s most characterful pubs this fast-paced work promises to be hilarious, melodic, and memorable. From John McCarthy, the creator of HUMANS: a robot musical (Graffiti) and WHALE (Cork Opera House), and with renowned musician Emily Donoghue, SNUG runs for 4 nights only. Supported by Cork City Council through the Local Live Performance Programming Scheme.

“The last two plays I wrote involved songs as part of the story (WHALE and HUMANS: a robot musical) and SNUG came about because I wanted to make a play entirely made up of songs, with no speaking at all” says John “once I twigged that SNUG is an anagram for SUNG I knew where this play would be set – a corner of a cosy winter pub, and then when I realised a further anagram of SNUG is GUNS I knew where the story might be headed…”

His play, The BelleVue, was selected for the Pavilion Play Platform in Spring 2021 and won a Project Creation award 2022 from the Arts Council to develop the play towards production in 2023.

In 2021 he wrote and performed CITY in co-production with the Everyman – the play was part of the Edinburgh Fringe Festival, supported by Culture Ireland and was selected for the Origin NYC Festival 2022.

John was the inaugural Theatre Artist in Residence at Cork Opera House-UCC 2018 – 2020. He’s a mentor on the Young Playwrights Programme with Fighting Words Cork, and creator of Hammergrin’s In Darkness Vast. He wrote Stage Irish, which won the Writers Guild of Great Britain Playwrights Progress Award 2014 and co-wrote Hollander, nominated Best Production at the Irish Theatre Awards. Recent directing includes WHALE (Cork Opera House, Midsummer Festival 2022) and In One Eye, Out the Other by Tadhg Hickey (Cccahoots, Dublin Fringe Festival and First Fortnight Festival 2021).

Emily Donoghue is a musician, theatre performer and composer from Galway. Kaleidoscopic sounds and a fierce passion for detail have defined the 26-year-old’s musical path thus far.

Gigging nationally and abroad from the age of 12, then quickly progressing into theatre work as a teenager, Donoghue currently splits her time working as a touring session musician with various bands (TOUCAN, Billow Wood, Paddy Dennehy) and in the theatre world alongside companies like Decadent (Vernon God Little) and Cork’s own Graffiti (Humans: A robot musical) in both compositional and performer roles.

“I’m honoured and very excited to be working with John (McCarthy) on this project, moving from side-stage to a fully fledged acting role for the first time – there’s a comfort and trust there that I never expected from such an unfamiliar position”