On Easter Monday night, 19th April 1897, the building first opened its doors as the “Cork Palace of Varieties”. On the opening night the Chairman, Mr John O’Connell said, it was “without question the prettiest, most commodious, and best-equipped place of entertainment in Ireland.”

Later, the building would provide entertainment to Corkonians, as one of the city’s major cinemas for almost 50 years. The House with the Perfect Sound as it was fondly known, closed its doors in 1988.

In 1990, the beautiful listed building became a working theatre again when Everyman Theatre Company took on the challenge of saving it for its original theatrical purpose, re-launching it as the Everyman Palace Theatre. In 2012 the theatre rebranded and became known simply as The Everyman.

Last year, after an enforced 547 days of closure due to the covid-19 pandemic, The Everyman tentatively opened its doors to live audiences once again. Earlier this month, the team gathered in the auditorium for the first time in just over two years. In what felt like a special moment that marked the resilience of a cultural institution that has survived multiple wars, pandemics, and economic downturns, Executive Director, Sean Kelly and Artistic Director, Sophie Motley presented the organisation’s new strategic plan. 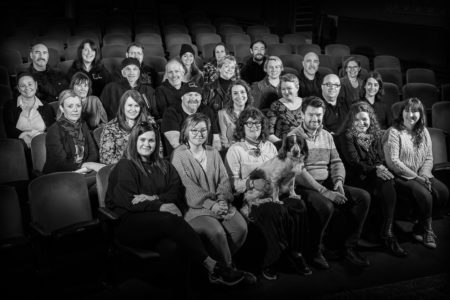 Executive Director, Seán Kelly said, “Having survived the burning of Cork, a Civil War, a flu pandemic and, now, Covid, it really is incredible to be able to celebrate 125 years. After all this time, having come through so much, we’re still presenting great shows for our audiences and there’s much, much more to come from this fabulous old theatre.”

Artistic Director, Sophie Motley said, “We’re also looking to the next 125 years, to the artists, audiences, and communities who will shape the future of culture in Cork City and County. This will see us nurturing young people and sharing our beautiful theatre with the artists and audiences of tomorrow.”

After surviving covid and adapting to digital programming during lockdown the new strategy looks ahead with a sense of buoyancy as it sets out aims and intentions for the next two years.