Lord Mayor, Cllr. John Buttimer was on hand to present a cheque for more
than €7,000 to Cork ARC Support House this week. The much needed funds
were raised by the Lord Mayor’s Charity GAA Game, which brought together
representatives of Cork’s media to play a match against home club of the
Lord Mayor, Bishopstown GAA on 26 April 2013 with Seán Óg Ó hAilpín as the
celebratory referee.

“The Lord Mayor’s Charity Match was a great success in terms of the funds
it raised for Cork ARC House, which will enable this charity to continue to
provide essential support services to patients and their families who have
been diagnosed with cancer, but more crucially in the focusing of attention
on the issue of cancer and the need for community based services. I am
extremely grateful to the organising committee, the players and everyone
who contributed to the event and for making it as successful as it was.
There was a tremendous atmosphere in the Bishopstown GAA Club on the night
and no one was too focused on the final score. The winner was Cork ARC
House and raising awareness about cancer”.

“On a personal note I am extremely appreciative of the kindness and support
shown to me over the past number of months since news of my own illness
became public. The reaction of the people of Cork has been uplifting and
encouraging and they have enabled me to continue in my role as Lord Mayor”,
said Lord Mayor of Cork, Cllr. John Buttimer.

Hilary Sullivan, Head of Fundraising & Corporate Affairs at Cork ARC was
present on the night to receive the cheque presentation. She added “It was
a real honour for Cork ARC Cancer Support House to be chosen by the Lord
Mayor of Cork Cllr John Buttimer for his Charity GAA Match. We are very
grateful to the Lord Mayor and the organising committee for their
dedication and hard work in making the event such a success.

It has been a fantastic opportunity for Cork ARC to raise more awareness of
our services, allowing us to reach out and help more people affected by
cancer in the community and also to generate much needed funds helping us,
in these difficult times, to continue offering our services free of charge
to cancer patients and their families”.

Rory Noonan, Chief Sub-Editor of the Evening Echo and a member of the
organising committee said, “On behalf of the organising committee I would
like to thank all who contributed to make this event the success it was. The
amount raised went way beyond the expectations of the organisers and it
shows the generous nature of all when it comes to supporting facilities
like Cork ARC House”.

Other members of the committee are Rebecca Milner, sports writer with the
Evening Echo, Jim Ryng and Robin Murray of Bishopstown GAA. The organisers
would like to acknowledge the support of the Cork County Board, the
companies who made corporate donations and the sponsors, in particular
Chill Insurance for their sponsorship of the game. 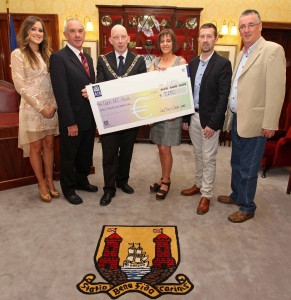 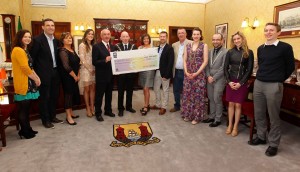