The 28th Cork French Film Festival will light up the silver screen from 5th to 12th March, with a programme bursting with creative vitality, from a host of dynamic French filmmakers: a programme packed with premieres, previews screenings, special events, masterclasses, and much more. 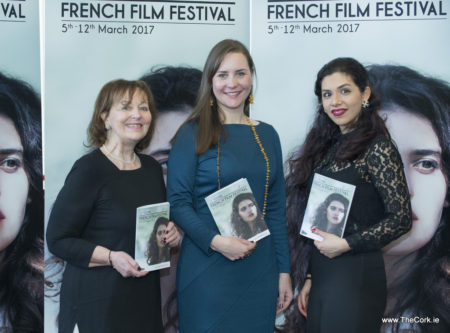 Festival Director, Nora Callanan, together with Festival Curator, Julien Planté, celebrate the vital force of the 7th Art with an exciting line-up featuring the latest and best in contemporary French cinema.

Opening this year’s Festival is the high-profile biopic of the legendary French underwater explorer, Jacques Cousteau – The Odyssey (L’Odyssée), directed by Jérome Salle and starring Lambert Wilson and Audrey Tautou.

Special Festival Guest is internationally acclaimed photographer, director and environmentalist Yann Arthus-Bertrand, who will introduce his latest Documentary Human – Lord Mayor’s Screening (free to the public).
This remarkable artist and humanitarian will also present a Masterclass in UCC.

Cork French Film Festival will also welcome rising French-Lebanese star, Manal Issa, who plays the main character in the acclaimed Parisienne, directed by Danielle Arbid. Manal Issa will be in Cork to introduce her film at the Gate Cinema on International Women’s Day, 8th March.

Other unmissable events include Cine-Concert with live commissioned score by Cork’s award-winning artist and composer, Ray Scannell. He will score and perform a specially commissioned work for 28th Cork French Film Festival, on the silent classic L’Appel du Sang, in the Curtis Auditorium at CIT Cork School of Music.

Cork French Film Festival continues its enduring link between food and cinema, taking you on a culinary journey, with a host of unmissable events:

A candlelit dinner in Ballymaloe Grainstore, followed by a screening of Les Saveurs du Palais.

Cork Institute of Technology will be the venue for all chocolate lovers, with French Chocolatier Benoît Lorge who will give a demonstration, followed by a screening of Kings of Pastry.

Red Obsession will be screened at The River Lee, followed by delightful French dining and wine pairing.

French composer and accordionist, Christophe Rohr, will ensure a lively atmosphere throughout the week. Keep an eye and ear out for pop-up parties at the Festival ClubArthur Mayne’s on Pembroke Street.

This Nationally Acclaimed Festival, whose Principal Funder is the Arts Council, Grant-Aided by Cork City Council, and supported by RTÉ Supporting the Arts, is the ideal event to savour the best in French cinema, while enjoying the unique French ambiance that it brings to Cork.

Nora Callanan, Festival Director, said: “Alliance Franҫaise de Cork is all set to present this year’s sensational edition. We are deeply honoured to have His Excellency Michael D. Higgins, President of Ireland, as sole Patron of the 28th edition. The Festival is a unique opportunity to experience cinema in a personal and close-up sense – to feel the pulse of le 7ème art. Enjoy a fantastique cinematic experience !”

Julien Planté, Film Programmer, said: “It is a huge honour for me to be invited back to curate the 28th edition of this remarkable Festival, and to work with a fantastic team. This programme is one of the most diverse to date, featuring iconic French actors, talented newcomers, award-winning films, Premieres, Preview screenings and many other treats. This Festival is about cinema in all its diversity, and that is what we want to celebrate with the wonderful public of Cork.”

Delve into the Cork French Film Festival’s exciting and contemporary programme, you won’t be disappointed. Visit www.corkfrenchfilmfestial.com for details.