Two weeks ago we reported how businesses on Cork’s Mac Curtain Street unveiled a marketing idea of referring to their part of the City as the ‘Victorian Quarter‘. The area was named after the Victorian-age buildings. The aim is to effective brand this part of the City as a stylish restaurant, and history rich area, similar to Dublin’s Temple Bar.

Now, a separate non-business grouping which wants to remove references to (Queen) Victoria in Cork has sent a letter to the City Council opposing the spending of public funds (if any) on supporting this branding scheme.

The ‘Cork Street Names Campaign’ recently painted over the word Victoria on street name signs are part of a civil disobedience campaign. They referred to Victoria as the “famine queen”, and blacked out the former British monarchs name from signs including at Victoria Cross and Victoria Road. 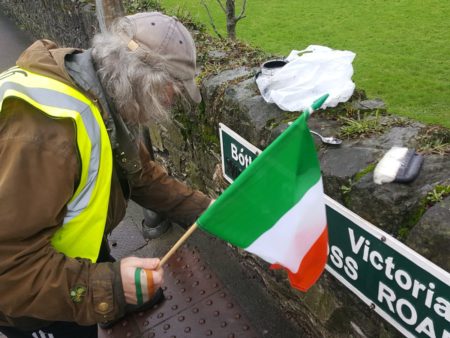 The campaign group strongly believes that the Cork Lord Mayor should hear their ‘Comprehensive Proposals’ on Streetname reform which “have taken several months to prepare”, but thus far the Lord Mayor has declined to meet.

The letter to elected members of the Council asks that 4 particular questions be considered by Council.

We have an outstanding request for a meeting with the Lord Mayor, we wish to present our ‘Comprehensive Proposal’ on the issue of street and place names in Cork.

Regardless of how you view our Civil Disobedience on the use of the name Victoria, we hope that you share our concerns, considering her role as the Famine Queen.

Our request is that you raise in Council:

That use of “Victoria” in our street/place names is inappropriate and that the process to change it be commenced.

That Council will agree to the erection of a monument to An Gorta Mór in our city centre.

That the Lord Mayor should receive our ‘Comprehensive Proposal’ on this issue.

That details of Council expenditure on the development and promotion of the name/logo of the so-called ‘Victorian Quarter’ be published.
It is our hope that Council members from all Political Parties and Independents should take up this issue as their own, it is fundamental to our dignity and self-respect.

We look forward to hearing from you in regards to raising these matters at Council.