The new 85 South Mall development enters its final phase of construction, as the scaffolding was recently removed from the South Mall facade, revealing how well it integrates with the existing streetscape

The Developers, JCD Group, have confirmed that the 46,000 sq ft Gold LEED designed office building is now fully let. US technology company Forcepoint are leasing the ground and first floors to cater for their ongoing expansion in the city centre. Construction of the building, which has KPMG, as the other tenant, commenced 12 months ago. The building is on target to be weatherproofed by the end of October and both tenants are expected to occupy their new offices by the end of Quarter 1, 2019. As part of the completion of the development, significant public realm improvements will be carried out along Phoenix Street, Crane Lane and Smith Street, helping to rejuvenate this part of the city centre. 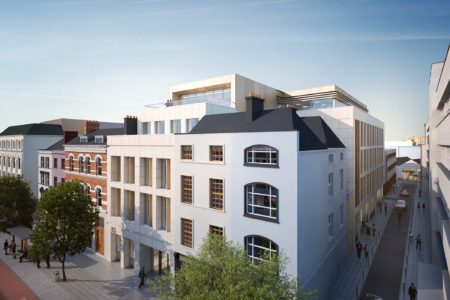 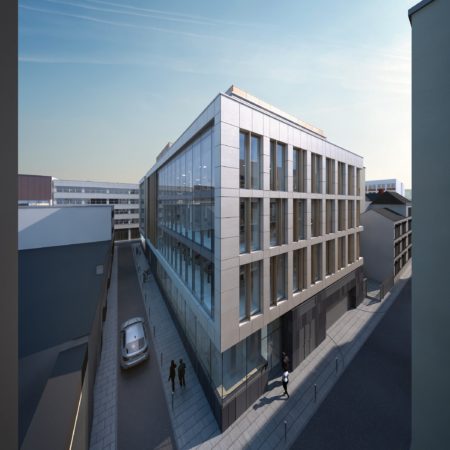 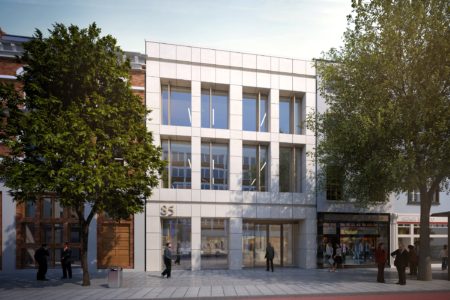 A graphic representation of the new 85 South Mall development. The Developers, JCD Group, have confirmed that the 46,000 sq ft Gold LEED designed office building is now fully let. As part of the completion of the development, significant public realm improvements will be carried out along Phoenix Street, Crane Lane and Smith Street, helping to rejuvenate this part of the city centre.

Cybersecurity company Forcepoint, with headquarters in Austin, Texas announced back in June that it is to hire 100 new staff in the first year of operations for their new offices in Cork that focuses on greenfield software development. The new Cork operation is set to become a centre of excellence for new product development in the cloud and endpoint cybersecurity technology space. The company currently has 40 employees located in an interim space in One Albert Quay, the sublease of this space was facilitated by JCD Group, to allow Forcepoint to get set up in Cork prior to the company finding their permanent home. The company is actively recruiting in the following roles; development and QA managers, product managers, cloud operations, technical leads, developers and testers.

In the last two years, the South Mall and The Grand Parade has witnessed a transformation with a number of technology companies setting up or moving into the city centre. Companies such as: Eventbrite; Cylance; NGiNX; Facebook; AlienVault (recently acquired by AT&T); Huawei and Keeper Security have all located in the central business district in that time. The opening of the Republic of Work, co-working space has also added to the locations growing reputation as a new emerging “tech corridor” being established in the city centre. These companies have added considerably to the number of people working in the city centre, which has been a welcome boost to city centre Hotels, Retail, Restaurants, Bars and Cafés. This trend bodes well for Cork, who’s metropolitan area is expected to grow from 209,000 to 315,000 in the next 20 years, according to the 2040 National Development Plan. It is envisaged that a sizeable percentage of this increase in population will be in the city centre and its immediate suburbs, as Cork becomes a real counter balance to Dublin.

Further infrastructure investments, such as the proposed light rail network, rapid bus transit corridors, Harley Street footbridge (currently under construction) and pedestrianisation of the city centre core will ultimately motivate people to switch from their cars to public transport and cycling. While it is still early days, it is clear to see that the strategy to move people back into the city centre to live and work is beginning to bear fruit, as Cork begins to reshape itself into a modern European city.

“We are delighted to confirm that 85 South Mall is now fully let and will accommodate up to 450 people when fully occupied. It is a great endorsement in Cork City centre to have a world class company, such as Forcepoint chose to locate a centre of excellence here, as well as KPMG’s ongoing investment. In recent years, we have seen increased demand from companies looking to have offices close to all the amenities the city centre has to offer. These two companies are looking to attract the best talent in their respective fields and believe that this building and central location will assist them in this task. Its location right next to the busy shops, bars and restaurants of Oliver Plunkett Street and St Patricks Street is a big selling point when attracting and retaining staff.”

Lawrence Owens commenting on behalf of the Cork Business Association, ” We are delighted with the news of JCD’s new 46,500 sq ft office development at 85 South Mall which is due to open in early 2019. The building has been expertly designed so as to fit very naturally into its surroundings on this historic business street. The street is steeped in tradition and this fantastic new development will provide 450 jobs in the heart of the city which is a very welcome boost indeed.

The development at 85 South Mall will inject great vibrancy to the area and we are very much looking forward to the completion of this next generation sustainable building.”