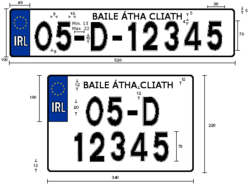 Technically it is called a an “index mark” or “vehicle registration plate”, but in day-to-day language, most people call it a “number plate” or “licence plate”

In the Republic of Ireland, you cannot have personalised number plates as they are thought of in other countries. Why? because Irish plates contain mostly numbers, not letters.

The closest you can get to a custom number plates is to pay in advance for a so-called ‘cherished number’. You must then wait for the number of cars registered to meet that number. Typically you might see 191-D-525 on a BMW 525, or 191-D-911 on a Porsche 911, or a 999 registration on an Emergency type vehicle (just examples!).

A registration remains fixed on the one vehicle until it is de-registered (exported, destroyed, etc.), and cannot be transferred to another vehicle.
The current regulations are set out in the amended Vehicle Registration and Taxation Regulations of 1999. These rules, as amended in 2012, prescribe the format, dimensions and technical specifications of the registration plates you see on vehicles.

Will the Republic of Ireland ever change from its current system? It actually has.

2013: Each year was divided into to parts, to help the motor industry space business throughout the year

The initial two characters used to refer to an entire year (e.g. 12 for 2012), but are now are suffixed with an indication of which half of the year the registration took place in (e.g. 191 for January and 192 for December)

The introduction of the dual registration plate in 2013 was seen as a long-term project for the Motor Industry. The Industry was seeking to shift some activity into the second half of the year to address the serious problem of seasonality in the Motor Industry in Ireland. After many years of campaigning for change, a new format was introduced in 2013, so new cars currently in Dublin have the format of 191-D-12345, and later in the year will look like 192-D-12345. 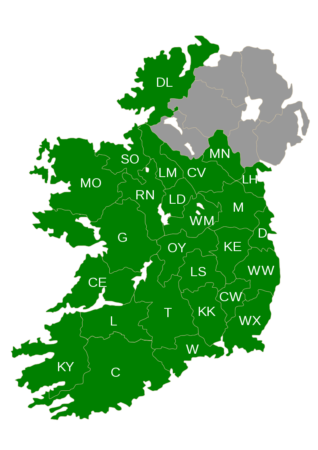 2014 County names changes: After many City & County Councils were merged

There was also a second change in recent years. The post-1987 system set out abbreviations for County names.

The importance of the Irish language is recognised in that the full name of the County appears in capital letters above the numbers, for example, CORCAIGH on C plate.

In contrast, the situation in Northern Ireland is different. A registration can be transferred, plus registrations use more letters so are more open to matching dictionary words, or personal names.

Northern Ireland uses the UK system where it is possible to disguise the age of a vehicle, and its geographic link. This website on Irish number plates explains the Northern Ireland process, and offers a simple three-step process to perform a transfer. For the rest of the UK, drivers need to access vehicle registration data via Gov.uk and the DVLA website. CarVeto provides all DVLA open sourced vehicle check details for all cars, motorcycles and light commercial vehicles, including theft and accident alerts.