The achievements of 21 young students were celebrated Friday 28th June with an event at the Kinsale Outdoor Education Centre (OEC) in Cork’s stunning coastal town.

The event in question marked the graduation ceremony following the completion of the second Young Mariner Program; a 9-month outdoor education course which put students through their paces as they took part in challenges such as sailing, sea and river kayaking, open canoeing, power boat driving, wilderness first aid, campcraft and ancillary skills, such as navigation, sea safety and more. They also undertook the Gaisce Bronze Award, which focussed primarily on their skills training and coastal clean-up and environmental awareness; a topic that is currently very much to the forefront of the social conscience. This year’s students were a part of the second instalment of the program and experienced a wide variety of Marine-related skills training and certification, along with a vast array of opportunities to strengthen their personal development as teenagers. 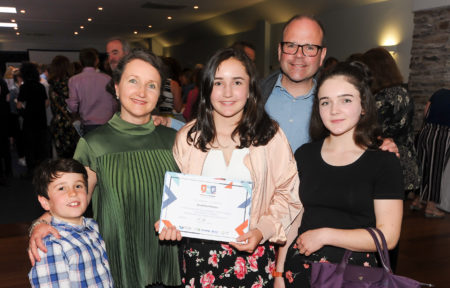 Graduate Seraphina Emerson with her parents Geraldine and Daniel, sister Alienor and brother Colm, after receiving her award at the presentation ceremony to graduates of the Kinsale Outdoor Centre Young Mariner Program, at the Trident Hotel in Kinsale.
Picture: David Keane. 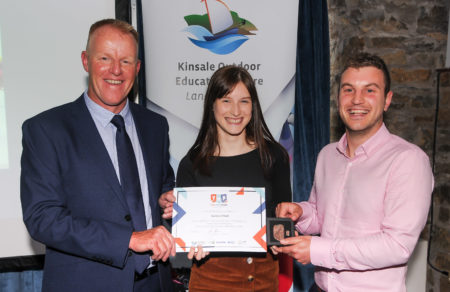 Jon Hynes, director of the Kinsale Outdoor Education Centre, left and Paul Darby, development officer of Gaisce-The President’s Award, making the presentations to Saoirse O’Neill at the awards presentation ceremony to graduates of the Young Mariner Program, at the Trident Hotel in Kinsale.
Picture: David Keane. 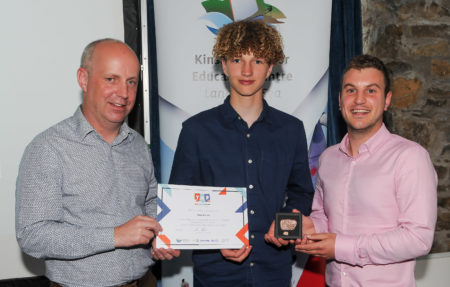 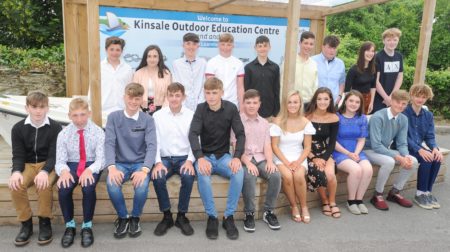 The event incorporated a tour of Kinsale OEC for those in attendance, followed by the eagerly-anticipated graduation ceremony, which took place at the Trident Hotel. Here, guests celebrated and toasted the achievements of the young graduates, who have all come to the end of what was a fascinating and enlightening 9-month journey. The young stars of the night were eager to share their experiences with parents, family members and distinguished guests.

The program was conceived by Jon Hynes, Director of Kinsale Outdoor Education Centre, in a bid to provide an opportunity to local youth to gain the very best in training. Speaking at the event, Mr Hynes said: “We’ve all been very much looking forward to this evening’s graduation ceremony as it marks the culmination of months and months of hard-work, teaching, learning and most of all, fun! While the priority of the Young Mariner Program is to teach young people the importance of water safety, how to operate water-based transport and how to respect the sea in all senses of the word, I think I speak for the Instructors and students alike when I say we have enjoyed each and every step of the journey. I hope that our young graduates can hold their heads high in the knowledge that they have gained some incredibly important skills that will stand to them in endless ways in their future endeavours.”

A number of students including Rachel Fox, Charlie Barton, Max Riome, Finn Bowen and Grace Hynes spoke very eloquently during their speeches and recalled the challenges and many high’s they experienced during the 9 months. They also stated that they now move forward into life with added confidence to take on new challenges.

During the course, the students visited the National Maritime College in Ringaskiddy to explore future opportunities in the Marine sector, so we hope they will carry this inspiration with them as they continue their educational journey.”

Minister of State for Mental Health and Older People Jim Daly, was also in attendance at the event and commended the Young Mariners on their achievements and contribution to the community. He also acknowledged the importance of programs such as these for the development of young people’s confidence and sense of purpose in life. Looking after even the smallest jobs one is tasked with and doing them to the highest standard adds so much value to your community he advised. Minister Daly was a very welcome guest of honour and took plenty of time to mix with the large crowd in attendance.

Mr Paul Darby, Development Officer with Gaisce, the President’s award also attended and celebrated the values of those who achieve this special award and how it can span the key themes of developing oneself, working together, learning new skills and working in the community.

The Young Mariner Program has concluded for this year but Kinsale Outdoor Education Centre is now available if you would like to register your interest for the start of the next program which begins in early September.