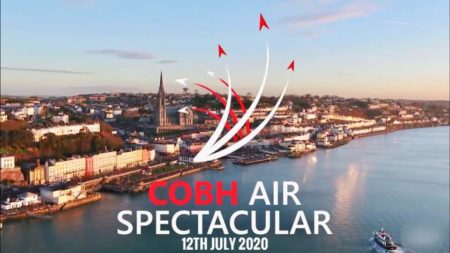 The original poster specified the date of the event, which has now changed

The inaugural Cobh Air Spectacular, scheduled for 13th July 2020, has been postponed until August 2021.

Organisers say it is “to facilitate expanding what promises to be the largest air show ever seen in the history of Cork Harbour.”

Organisers said they were bowled over by the level of national and international interest following the launch and, as a result, the event has become much bigger than originally anticipated.

They are pushing back the date to facilitate a number of international fleets, which will – in turn – attract many overseas visitors to the region. Those involved say this is a huge opportunity to showcase Cork and to establish Cobh and the lower harbour as a regular venue for a world-class air show, so they want to ensure the most successful event possible.

The Cobh Air Spectacular has already attracted a fantastic line-up, including dozens of aircraft, such the AeroSuperBatics Wing walkers, The STRIKEMASTERS, Team Raven, Jet Display teams, Historical aircraft, The coastguard & RNLI, with many more yet to be confirmed.

A number of exciting announcements are expected to be made over the coming months. Keep up to date on https://cobhairspectacular.com/