There is still a living person called ‘Lord Kingsale’. The title itself comes with no political powers, no salary, no demesne, no stately house, but it’s a fascinating part of Irish History

Kinsale is a tourist town in County Cork. It was previously spelt as Kingsale, in the medieval English way. There is a Lord Kingsale pub in the town today, but did you know there is still actually a living person who is the ‘Lord Kingsale’? The full title of the peerage is Baron Kingsale. it happens to be the oldest barony in the Irish peerage; hence Lord Kingsale is known as the premier baron of Ireland.

The feudal barony dates to at least the 13th century. Such is the antiquity of the title there is a question mark over how many Barons there have been. Some sources include the holders of the feudal barony, while others start their counting only with the peers from 1340, and still others from 1397.

Several sources claim that the Baron holds the privilege of being covered (that is, wearing a hat) in the presence of the monarch. The 11th Edition of the Encyclopædia Britannica, however, disagrees, claiming that the story “is a legend without historic foundation”. Historian & Researcher, Nial Stewart also disagrees with this tale. Check out his video lecture below for more.

Baron Kingsale is also Lord of Ringrone, and Lord of Courcy.

The general family departed Ireland in 1838. That was 182 years ago! indeed it was so far in the past that it was before the Famine (1845–1849). Most Lords Kingsale have lived in the UK since. As with many peerages, the family no longer retains its once extensive property in Ireland, indeed the present Lord resides in New Zealand, and said he has only been in Ireland once. 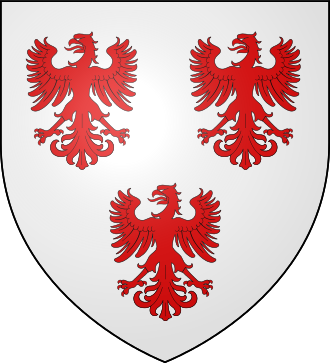 Coat of arms of Courcy family

The 30th (or 35th – depending on which version of history is followed) Baron was called John de Courcy. He lived from 1941 to 15 September 2005. In his early years, he was educated at the expensive Stowe School followed by the Universities of Paris and Salzburg. However, as everyone knows – be they a peer or not – an income is necessary in order to exist. While the stereotypical view is that a Lord has hundreds of acres of land which he can rent – the reality is that if that is not the case then even a Lord must create cash flow somewhere. In order to earn a living from his mid 20’s onwards, he took on many different jobs. These included being an odd-job man and plumber, a wine-waiter and a butler for hire. By the 1990’s arthritis affected his ability to work. He moved into sheltered housing in Somerset, with no phone. When he died in 2005 his fascinating obituary was published in the UK Daily Telegraph. It was also syndicated by the Sydney Morning Herald.

Following the 2005 death of the Baron, the title passed to his cousin, Nevinson Mark de Courcy, who was born in 1958. He lives in Remuera, Auckland, New Zealand. He is the 31st (or 36th) Baron, however, his name does not yet appear in the current Role of the Peerage because he has yet to file a formal claim.

His is a case style of collateral succession, it is not enough to prove one’s own descent; it is also necessary also to prove “that all male lines of descent from the first peer senior to that
of the claimant are extinct, and that no male senior to the claimant in his own line is still living.” This would require much time and expense to draft.

TheCork.ie was pleased to be contacted by the present Lord Kinsale – Nevinson Mark de Courcy – this month. He explained “Given that the most recent common ancestor lived several generations ago this is a challenging task requiring extensive research. I believe it is doable and hope to lodge a claim eventually.” He continued “In the meantime, my tenure of the title is not in question as far as I know. We met my predecessor John a couple of times and he always acknowledged my late father, and latterly me, as his successor.”

Under the terms of the Royal Warrant of 2004, any person who succeeds to a Peerage must prove his or her succession if they wish to be placed on the Roll of Peerage, otherwise, that person may not be legally recognised in the UK as a Peer in official documents, however, speaking generally; there must be many Lords who simply haven’t filed papers. Given that there is no longer a paid seat awaiting a hereditary peer in the House of Lords there may be little incentive for many inheritors to prove their entitlements.

As part of Kinsale Arts Weekend Historian & Researcher, Nial Stewart has delivered an interesting lecture on YouTube in recent days

Related articles: If you found this article interesting, then check out our other articles about the Cork peerages of ‘Lord Midleton‘ and ‘Lord Cork‘