Cork City Council has launched a new recruitment drive for full time firefighters, asking new recruits to “Be the Difference” for the city they will serve. This is the first time that the fire service has opened to new recruits since 2012. Up to 20 firefighters will initially be recruited, with a panel being established from which future recruits will be drawn.

The news comes as Cork City Fire Brigade marks the 100th anniversary of the Burning of Cork, when firefighters tried to prevent the spread of devastating fires set by Crown forces. Their heroic efforts will be marked through a series of events later in the year but are set to provide inspiration for a new intake of firefighters who will protect a very different city from that of the 1920’s. 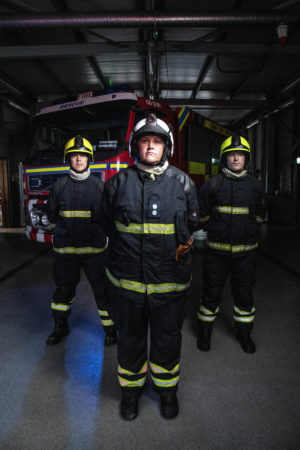 Chief Fire Officer John Ryan has commented; “Cork’s fire service is evolving with its city. We are hoping to draw the very best from across the community, who are willing to be the difference. The Brigade has a long and proud history, but the common thread is that the city’s firefighters are always ready to protect, prevent and respond. Only the best candidates will make the grade, however it’s important to note that all candidates will be assessed across a broad range of skills and abilities. This includes not just physical strength but attitude and aptitude. There is no stereotypical firefighter – but there are good team players.”

The “Be the Difference” recruitment campaign features Station Officer Irene Wallace along with firefighters Gabor Molnar and Ger Dolan. A series of specially commissioned videos featuring the work of all three will be posted on social media throughout the month of September.

The campaign will focus on how the job of a firefighter has evolved to include important work on prevention and community fire safety. The new recruits will work in the Community to prevent fires and accidents from happening in the first place, with the ultimate goal of preserving life and property.

Station officer Irene Wallace has said: “Being a firefighter is like being part of a family. I cannot imagine doing any other job. Every time we climb into the engine on the way to a call, we know that we are only as good as the sum of our parts. If you want to serve your community and want to do a job that is exhilarating and rewarding, then this job is for you. As modern firefighters, we want the public to be educated about the risks from fires, so that they never need to call us out. However, we also need them to know that we are always there if they need us.”

Applications for the position of firefighter with Cork City Fire Brigade can be submitted between Friday September 4th 2020 and 4pm on Friday September 25th 2020. Further information is available through www.corkcity.ie/recruitment