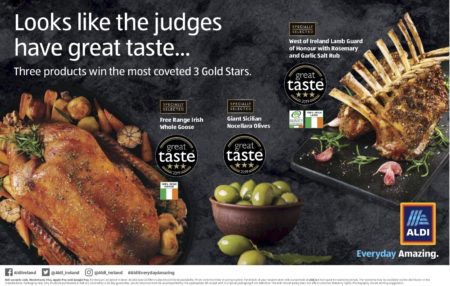 Aldi Ireland has won 52 titles at the 2020 Great Taste Awards, including the highest possible three gold stars award for its Specially Selected West of Ireland Lamb Guard of Honour with Rosemary and Garlic Salt Rub (€22.99/kg), Specially Selected Free Range Irish Whole Goose, winning the title for its second year (€54.00, 4.3kg – 5.5kg) and Specially Selected Giant Sicilian Nocellara Olives (€1.99/150g). Aldi retained its title as the #1 Irish retailer for these coveted 3 gold star awards, all three of which will now go forward for the overall champion award of the Golden Fork Awards.

The Great Taste Awards, organised by the Guild of Fine Food, is the world’s largest and most trusted food and drink awards. Over 12,700 food and drink products were blind tested by expert judges, with the winners chosen by a panel made up of top chefs, buyers, food writers and retailers following a rigorous judging process.

Aldi’s Specially Selected West of Ireland Lamb Guard of Honour with Rosemary and Garlic Salt Rub, Specially Selected Free Range Irish Whole Goose and Specially Selected Giant Sicilian Nocellara Olives were awarded the highest accolade possible of three gold stars, putting in the top 1.6% of all entries and qualifying it for the prestigious Golden Fork Awards which will be announced later this year. This is the second year in a row that the Skeaghanore, West Cork produced Irish Goose has won three gold stars at the Great Taste Awards.

“In 2019 we were not only honoured to receive three stars for our Aldi Specially Selected Free Range Goose but we had the privilege of travelling over to London and experience the Golden fork awards. This 2020 award is a complete surprise, and to hear again that it has been nominated for a Golden Fork assures us that the team here in Skeaghanore are doing a great job. Our geese are reared by the Hickey family in the most traditional way possible, with access to grazing fields that overlook some of the most picturesque views of Roaring Water bay. We believe that the salt air adds a unique flavour to our geese that you won’t find anywhere else. Aldi have supported us since the beginning and have helped us become one of the leading suppliers of geese in the country.” 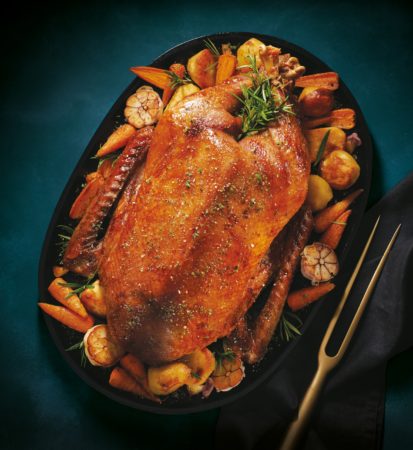 “Winning 52 titles and in particular retaining the number one position within Irish retail for the 3 gold star awards is a great achievement and proves that Aldi’s unbeatable prices doesn’t mean a compromise on quality. These awards showcase the highest quality of produce and I would like to congratulate all of our Irish suppliers especially Dawn Meats and Skeaghanore Duck on their outstanding 3 star achievements”.