A Douglas lady – who studied at UCC, UL, and Oxford – Patricia (Pat) O’Leary has published a book entitled The Gentleman Saint.

No, not that Gentleman Saint! not the Roger Moore TV Character, but a real (Catholic) Saint, who also happens to be English. 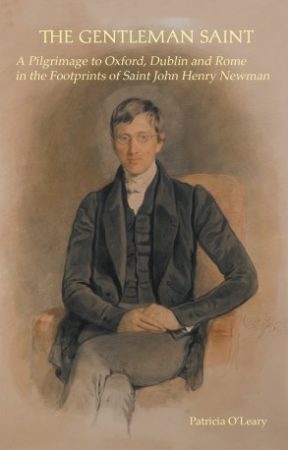 John Henry Newman (1801–1890) was canonised as a saint in the Catholic Church recently, in October 2019. He was an English theologian and poet, first an Anglican priest and later a Catholic priest and cardinal, who was an important and controversial figure in the religious history of England in the 19th century. Indeed here in Ireland, he is famous for another reason. He took on the mammoth task of setting up a Catholic University in Dublin, now UCD. Yes, a founder of what we now call University College Dublin was an actual Saint!

Patricia (Pat) O’Leary from Douglas, Cork studied Catechetics and Scripture at UCC, and Pastoral Care at CUH. She received a Master’s degree from UL and spent a year at Blackfriars Hall in Oxford ‘reading’ Cardinal (now Saint) John Henry Newman.

Details of the new book

Why has this book been written now?

Benedict XVI – who served as Pope from 2005 to 2013 – wrote that John Henry Newman “was a man whose whole life was a journey, a journey in which he allowed himself to be transformed by truth in a search marked by great sincerity and great openness…”

This quote provided the inspiration for the pilgrim journey in the book, which follows in the footprints of St John Henry Newman.

This eminent theologian, philosopher, educationalist and poet, doesn’t fit the usual model we have come to expect of saints, for he himself wrote that “academics don’t become saints”. But St John Henry broke that mould!

How does the book develop

We begin our journey with a cursory look at little John Henry’s childhood and the life of the Newman family. We then travel on through those soul-searching years at his beloved Oxford that ultimately led to his entry into what he termed, ‘The One Fold of Christ’ and the heartbreak of having to leave Oxford as a consequence.

We will then follow him on his many journeys across the Irish Sea – 56 in all – as he takes on the mammoth task of setting up a Catholic University in Dublin, now UCD, and building the beautiful church of Our Lady Seat of Wisdom. Ultimately we follow Newman’s intermittent four journeys to Rome that marked the major stepping stones in his life.

“In writing The Gentleman Saint, Patricia O’ Leary has done a great service to those who admire Cardinal (now Saint) John Henry Newman, as well as those who simply know the name, but little else about him. A significant part of her book is devoted to his contribution to Irish education. This is as it should be for it is not an exaggeration to say that it was enormous.”
-Dr Patricia Casey, Professor of Psychiatry, University College Dublin

Where can you buy this new book?