Why was a Cork Cathedral trending on twitter? #SFB150 @DrPaulColton

Cork’s Church of Ireland Cathedral – Saint Fin Barre’s Cathedral – was trending on social media as #SFB150 for many hours yesterday, Monday 30th November, the 150th Anniversary of the Consecration of the Cathedral by Bishop John Gregg on 30th November 1870. Cork people, people with Cork connections and visitors to Cork from around the world have been posting their photographs of the Cathedral to mark the sesquicentenary. 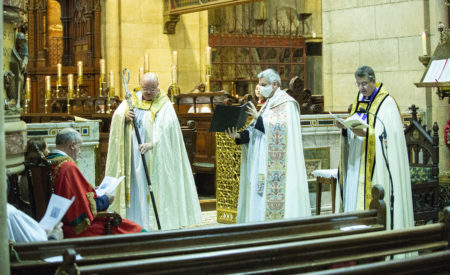 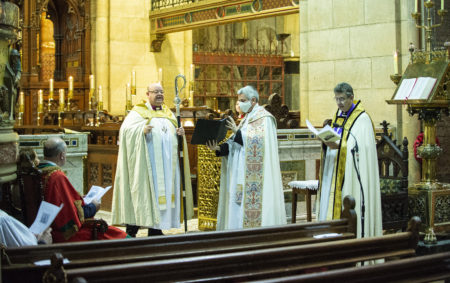 An online ceremony was broadcast from the Cathedral at which greetings were read from the President of Ireland, Michael D. Higgins.

President Higgins described the Cathedral as ‘integral to Cork’s story’ with a ‘profound connection to the very different city in which Saint Fin Barre’s was originally conceived and constructed.’

“Like the city itself Saint Fin Barre’s has evolved and changed since its early foundations in the seventh century. It has, however, continued to provide an enduring space of peace, comfort and worship for generations of Cork residents, and the many visitors it welcomes through its doors each year.

I thank all those who work to ensure that St Fin Barre’s Cathedral endures as a place of inclusion, solace and reassurance. I wish you well as you mark this milestone anniversary, and every success as you continue to enrich the spiritual, cultural and community life of Cork City.” 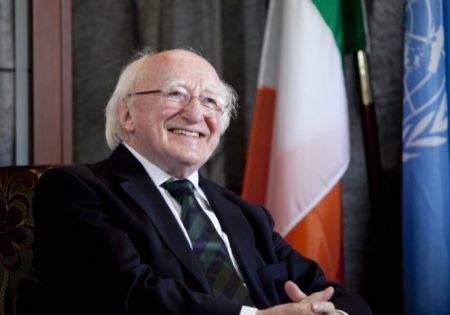 The planned celebrations were greatly curtailed by the coronavirus pandemic and participation in the ceremony was limited to the Bishop, Dr Paul Colton (with his chaplain, the Reverend Paul Arbuthnot) the Dean, the Very Reverend Nigel Dunne (with the Dean’s Vicar, the Reverend Ted Ardis), the Cathedral Wardens, and the Lord Mayor of Cork, Cllr Joe Kavanagh, accompanied by the Lady Mayoress, Stephanie Kavanagh

Many others, however, accepted the invitation to join online via the Cathedral webcam.

The Lord Mayor brought his own greetings in person on behalf of the people of Cork. He paid tribute to the courtesy and inclusivity shown by Bishop Colton and his predecessors over the years to the holder of the office of the Lord Mayor, and also to the members of the Church of Ireland helping to keep alive the historical significance of St Fin Barre.

As a son of Turners’ Cross, I grew up adjacent to the Cathedral and know it well. … The Church of Ireland Community in Cork has much to be proud of, most especially its contribution to the building of the city of Saint Fin Barre to what it is today.

Within the current level 5 restrictions the cathedral music department including the lay vicars of the cathedral, under the direction of Peter Stobart, Director of Music provided music for the occasion. The short liturgy opened with a fanfare of trumpets and Heraldic Fanfare and Marcia from Widor’s Third Organ Symphony played on the Cathedral organ (the largest in the country) by Assistant Director of Music Robbie Carroll.

The high point was the singing, following the blessing, of Te Deum Laudamus set to music by Irish composer, Charles Villiers Stanford.

We may have been few in number by what was important is that we were making this offering of thanksgiving and praise to the God of love who has been good to us through the years. We are promised that when we worship that all of heaven, ‘the great company of heaven’, joins in our worship. I feel this was a fitting way to do what needed to be done in these challenging times. As we know, Jesus promised that ‘where two or three are gathered in my name, I am there among them.’ We knew that to be the case today especially as Te Deum was sung. 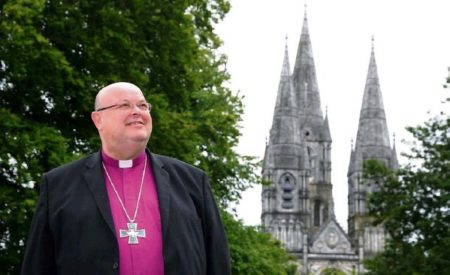 Afterwards, for posterity’s sake the few participants posed at the Great West Doors of the Cathedral, socially distanced. The Lord Mayor described it as a great honour to be there for this very historic occasion, and the Lady Mayoress said that she found it all ‘very moving.’ 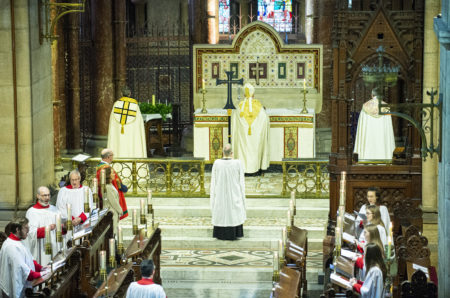 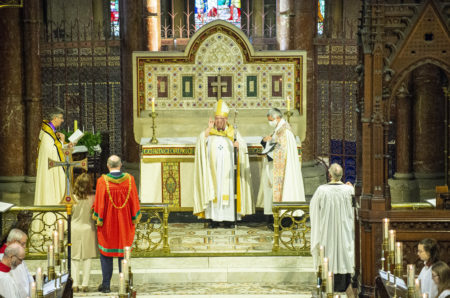