Amy O’Brien from Cork won the Dr AEJ Went Award for Young Specimen Angler of the Year. Amy won the award for catching a Golden Grey Mullet weighing 1.02kg at Rosscarbery, Co. Cork on the 1st of September 2020. The award is named after Dr Arthur Went, a noted fisheries biologist and one of the two founder members of the ISFC, nominated this award which is for the best specimen of the year (based on the highest percentage of the specimen weight) taken by an angler aged 13 years or younger. 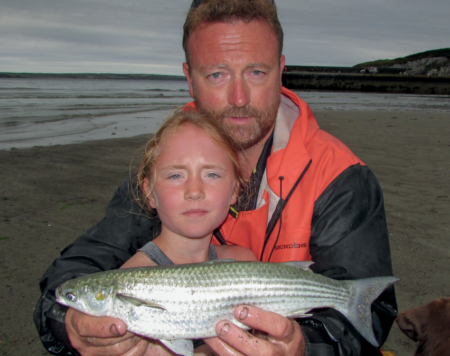 Jason Convery from Cork won the Minister’s Award for catching a Gilthead Bream weighing 3.37kg at Clonakilty Bay, Co. Cork on the 17th of August 2020. The award was inaugurated by the Minister for Communications, Climate Action and Environment, this “fish of a lifetime” award is for the best specimen fish of the year (other than a new record), and is presented to the angler who catches a fish which represents the highest percentage of the existing record.

Despite the COVID-19 pandemic anglers fishing in Irish waters in 2020 caught hundreds of large fish according to the just-published Irish Specimen Fish Committee (ISFC) report. One new record was set and over 300 exceptionally large fish of different species were caught by anglers from venues throughout Ireland. The main species were shark species like Smooth-hound and Spurdog and, in freshwater, Pike and Brown Trout dominated. All fish were caught, weighed, measured and released.

Details of all these fish and current Irish record fish are in the Irish Specimen Fish Committee Report 2020, which has just been released. The Irish Specimen Fish Committee, which is supported by Inland Fisheries Ireland, is an independent all-Ireland voluntary body which verifies and records the capture of large fish caught on rod by anglers in freshwater and marine waters.

The Irish Specimen Fish Committee report is available on the ISFC website SpecimenFish.ie or from the Inland Fisheries Ireland website FisheriesIreland.ie. Hard copies of the report will be available in mid-May.

Anglers both at home and abroad will be reading the report carefully to plan future angling trips to catch the big fish in Ireland.