Every era has its humorists and their fictional characters. From the 1970’s onwards there were ‘Cha and Miah‘ who described themselves as daycent run if the mill Cork working men. Now, there is ‘Reggie from the Blackrock Road’ who is on the high society end of the income spectrum!

Humourist Pat Fitzpatrick – who plays the fictional role of a wealthy Cork socialist called ‘Reggie from the Blackrock Road’ has been announced as the September 2021 Cork Person Of Month. His character ‘Reggie’ boasts of being a Captain of Cork Industry (another term for Merchant Prince) and for living in a €4.8 mansion on the upmarket Blackrock Road (comedy comes from unnecessary specifics). He is a male version of Mrs Bucket… sorry… Mrs Bouquet.


The Blackrock Road is an upmarket area, this can be seen from the amount of greenery

Pat has built a huge online presence over the last 18 months with humorous takes on life in Cork and mocking anyone who isn’t part of his exclusive gang of millionaires.

He is also the man behind the woman that is “Ask Audrey”, a spoof agony-aunt column that appears in the Irish Examiner every Friday.

As well as his journalistic work he has also authored some bestselling books, including “101 Reasons Why Cork is Better than Dublin”, “ 101 Reasons Why Ireland is Better than England” and a parenting book “No Sex, No Sleep”. He supplies a parenting column every week in the Examiner too, as well as a TV review column. Many will know him as a regular on the RTÉ Today Show with Daithí and Maura, giving his views on entertainment and current affairs.

“By his own admission Pat Fitzpatrick has built his reputation and audience by telling Cork people they’re better than everyone else, and that’s never a bad idea”, agreed award organiser, Manus O’Callaghan.

Pat, who grew up in Kinsale, will now go forward with the other Persons of Month chosen this year, for possible selection as Cork Person of the Year. 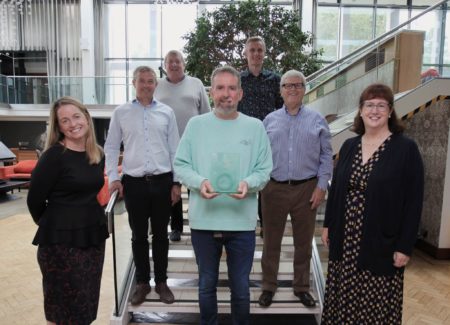