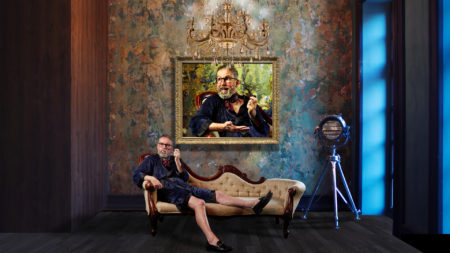 An Evening with Reggie is the debut live production from Cork’s most beautifully spoken man, Reggie from the Blackrock Road, who is a parody character, poking fun in god spirits at Cork’s merchant prince class. The Everyman is delighted to present the play’s world premiere in Spring 2022. Previews will take place on Thursday, 31 March and Friday, 1 April before opening night on Saturday, 2 April with 11 performances running until Saturday, 16 April.

Speaking to reporters outside his “5.2- million-euro mansion on the Blackrock Road”, Reggie said, “As you can imagine, I’m devastated that my play will run on the northside, but unfortunately the GAA is refusing to give me Páirc Uí Chaoimh. Still, I’m delighted to get this chance to work with The Everyman, and not just because they promised to bar people from Kilmallock. I’d say it will be a total hoot. And my accountant Scobie Comerford says a theatre show is very tax efficient. So, it’s win-win unless you’re a Revenue Commissioner. Fantastic.”

Director, Pat Kiernan said “I’m delighted that Bunty Harrington contacted me on behalf of Reggie to direct this production. On one condition. They double checked I went to Pres (PBC) and once satisfied this was true Reggie spoke to me directly; and he felt I could bring something to this work. I was I have to admit slightly taken aback when Reggie made the role clearer to me at that point. Despite 30 years of directing critically acclaimed productions for Corcadorca I was told ‘Reggie first, Bunty second and you’re a sloppy third’ Ah well a gig’s a gig I suppose.”

The Everyman’s Artistic Director, Sophie Motley commented “I’m over the moon that Reggie has deigned to come to the northside to present his first ever live show here at The Everyman. I know that our beautiful Victorian building will be up to his standards and expectations. To have a living legend of Cork gracing our stage to impart his wisdom will be a treat to look forward to as we emerge from winter, not to mention a great auld laugh.”