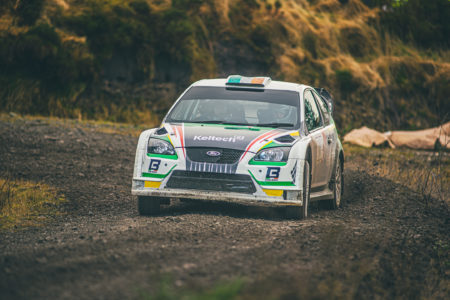 With only a number of days left to go, final preparations are being made right around the Island as anticipation builds to the opening round of the 2022 Motorsport Ireland Forest Rally Championship, this weekend’s Killarney Forest Rally, based in Castleisland, Co.Kerry. With a bumper field of over ninety crews registered so far, anticipation is really building for the fast and challenging stages that lie ahead on Sunday and the return to the calendar of an event that has not run in 15 years!

Based out of the centre of Castleisland, the rally will see competitors tackle three stages, each repeated twice, in what is sure to be a high-speed beginning to the 2022 Loose Surface season. The opening 9.88KM Mount Eagle stage will be followed by the mouth-watering prospect of the 16KM Forenane test. The loop will be completed by the 5.54km sprint over Enrights Way, before a dash to mid-day service and the trio repeated. With 82.84KM of tight and twisty gravel lanes to tackle for the competitors, it is certain to be a distinct challenge no matter the conditions.

Leading the field is a slew of top-level Machinery and some of the finest driving talent in the country, with plenty of crews holding realistic ambitions of standing atop the podium come Sunday night. The most exciting name is that of Cathan McCourt/Liam Moynihan, the 2019 champion committing to the Motorsport Ireland Forest Rally Championship behind the wheel of a McKenna Motorsport built 2l Ford Fiesta. Desi Henry/Paddy Robinson, Patrick O’Brien/Stephen O’Brien and Jordan Hone/Paul Hone lead a sizeable pack of Ford Fiesta Rally2/R5’s, with all being very experienced in The Woods and ready to make a good push at the 2022crown.

A slew of other R5’s will also be charging hard through the Kerry forestry roads on Sunday, with Gareth Sayers/Gareth Gilchrist in another Fiesta, Brendan Cumiskey in a VW Polo GTi R5 and Marty McKenna/Kainne Treanor in a Hyundai i20 R5. Former Irish National Rally Champion Ray Breen/Andy Hayes is expected to take the start in his Ford Focus WRC07, amongst a busy field that counts 30 4WD crews.

The 2WD battle, ever the exciting spectacle, is sure to be an absolute dog fight between the big-powered RWD cars, and the incredibly nimble and quick FWD’s. Waving the flag for the rear-powered side, David Condell/Paul Kelly are vastly experienced in the Woods and should be very quick, but from an entry that includes Shane McGirr/Denver Rafferty, Frank Kelly/Lauren Kelly, Michael Conlon/Ciaran McPhillips and Adrian Hetherington/Ronan O’Neill will be out to lay down a marker for the season. Keeping them on their toes will be the hard charging Rally4 powered youngsters, with both Ryan Caldwell/Grace O’Brien and Kyle McBride/Darren Curran among a strong bunch who could feature quite prominently on the leader board.

2022 looks set to be a bumper season of the Junior 1000 series as part of the Motorsport Ireland Forest Rally Championship, with the reduction in driver age seeing a significant bump in entries to the championship. The 2022 season kicks off with a bang for these youngsters, with fifteen crews taking on the Killarney Forest stages. Jack Brennan/John McGrath or Mossie Costello/Jonathan Keane may be the ones to catch, but many of the entrants are set to tackle their first ever event, so this season may be one to watch as its sure to be a cracker.

As always, the Irish Forest Rally Championship social media channels will be alive with lots of interviews, photographs and updates throughout the rally, and each round of the season, so make sure to swing by on Sunday if you can’t make it to Castleisland!