West Cork side Carbery Rangers reached the final of the Dermot Earley Cup, the senior men’s competition at the Lidl Comórtas Peile Páidi Ó Sé, the famed adult men’s and ladies club tournament which took place all over the Dingle Peninsula last weekend.

The West Cork side had a great run, beating Mayo’s Castlebar Mitchel’s (4-14 to 1-1) and St. Kieran’s of Limerick (3-5 to 1-1) to reach the final. On the other side of the group, the Mark Ó Sé managed Kerry side Listry overcame reigning Connacht Senior Men’s Champions Padraig Pearse of Roscommon and Galbally of Limerick to meet the Cork men in the final at Gallarus, home to host club An Ghaeltacht. 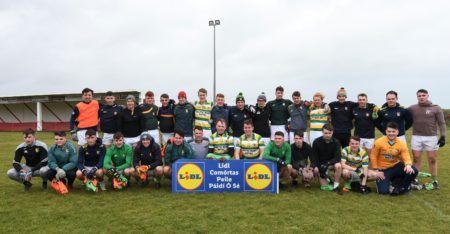 Pictured is the Carbery Rangers team who reached the final of the senior men’s Dermot Earley Cupc, osing to Kerry’s Listry, at the Lidl Choomórtas Peile Páidí Ó Sé 2022, the famed men’s and ladies club Gaelic football festival which took place all across the Dingle Peninsula last weekend.

Carbery Rangers, backed by a strong north-westerly wind, led 3 points to 1 point by half time. However, they failed to score in the second half as Listry got the upper hand, chipping away at long-range scores thanks to points from Aodan MacGearailt, Aaron O’Shea and Anthony Sweeney, with the Kerry side winning on a scoreline of 0-7 to 0-3.

Comórtas Chairman Pádraig Óg Ó Sé said, “We are delighted to have Carbery Rangers compete this weekend and wish them well in the season ahead. They are a credit to Cork in the way they conducted themselves. They enjoyed themselves by night and had a never say die attitude on the field of play playing three games all in one day which was not easy.”