Music Generation Cork City is part of Music Generation, Ireland’s national music education programme which gives children and young people access to high-quality performance music education. With a mission to remove barriers of access to music and create inspiring musical experiences for children and young people, Music Generation Cork City and The Kabin are thrilled to collaborate with Ireland’s National Festival to create such a memorable live performance opportunity for its young participants.

Music Generation Cork City’s The Kabin will travel to Dublin to dedicate original music to the harp. The Kabin’s young rap artists in collaboration with harper Donnchadh MacAodha, will bring their urban, meaningful and ‘pure daycent’ energy to performances of new and traditional Irish music.

“I think it’s going to be sick to get the chance to rap on stage again. It’s been so long. I live for music so I jump at any opportunity I get to perform” – Darren MC Tiny Stewart (Kabin Crew) 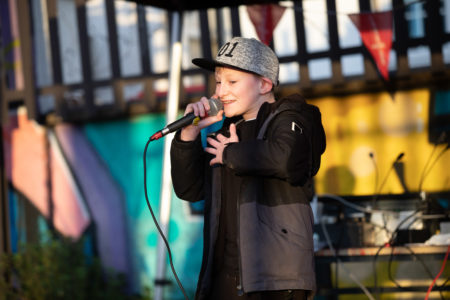 Joined by the acclaimed harper himself, the programme will also include arrangements of previous works composed by on Michael Rooney, performed by the Laois Trad Orchestra while Music Generation Mayo’s Harp Collective will take audiences on a thrilling journey of unique traditional arrangements. Nós Nua, Louth’s Youth Folk Orchestra which includes young musicians from across Louth, Meath, Monaghan and Armagh will perform “Causeway”, a suite of new music from Mohsen Amini.

In 2019, the Irish Harp was inscribed by UNESCO on the Representative List of the Intangible Cultural Heritage of Humanity. The last decade has seen a resurgence in harping among young people across Ireland, from Laois, to Louth, to Mayo, propelled by the work of Harp Ireland, Comhaltas Ceoltóirí Éireann and Music Generation. This programme celebrates a great harp revival for our younger generation and the Kabin Studio are delighted to represent Cork City at this landmark event.

Initiated by Music Network in 2010 Music Generation is co-funded by U2, The Ireland Funds, the Department of Education and Local Music Education Partnerships in which Education and Training Boards and Local Authorities play a lead role. Now over a decade on, it is anticipated that in 2022 alone, Music Generation will reach 80,000 programme participants nationwide. Ahead of the new collaboration with St. Patrick’s Festival, Music Generation’s National Director Rosaleen Molloy, commented:

We are so proud of all the young people involved in such a prestigious performance opportunity that is being created for a global celebration! It is so wonderful to see the return of live performance opportunities, especially for and by young people and we wish them every success for what promises to be a spectacular musical event. Particular thanks to all of the musicians and Music Development Officers involved in making this performance extravaganza possible.