Cork business has beehives outside offices

May 20th 2022: TELUS International Ireland is marking World Bee Day 2022 at a beekeeping workshop with honey produced from beehives introduced to the Cork campus last year, as part of the company’s bid to protect local biodiversity. The company is anticipating double the harvest of honey (40kg) this year. Working with beekeeping services company An Beach Dubh, two hives of up to 60,000 native Irish honey  bees — Apis mellifera mellifera — are being kept at the Mahon headquarters of the leading global customer experience (CX) innovator.

A partnership between TELUS International Ireland and An Beach Dubh is part of an initiative to repopulate urban areas with native high-quality bee colonies and raise awareness of the importance of bees. In celebration of World Bee Day, the TELUS International team in Ireland partnered with their colleagues in Bulgaria, where the company also has a number of bee hives, and marked the day by sharing educational facts about bee behaviour and conducting taste testing to compare the honey from both countries.

Séadna Mac Giolla Coda, a fourth generation beekeeper and founder of An Beach Dubh said: “The honeybees on the grounds of TELUS International Ireland in Cork have settled in well since the move to their new home this time last year. They have many options in terms of foraging for nectar and pollen: the gardens, parks and trees in the south- eastern parts of Cork City, the hedgerows and fields to the south of the city, and not to forget, all the pollinator-friendly wild-flowers on the campus grounds.”

He added, “The taste of any honey reflects the foraging options of the bees in a particular area. Most honey produced in Ireland is multi-floral (made from a combination of different food sources), as the honeybees here have a large variety of flowers, trees and shrubs, both wild and maintained within flying distance. In some countries, especially where honeybees are used for crop pollination, the resulting honey is mono-floral (made from a single food source), which results in a strong-tasting honey, with less complex flavours. The honey produced by the honeybees located at TELUS International has a very unique taste due to the variety of plants that are growing in and around Cork City. It also has a hint of tanginess, due to Lime trees growing in the Blackrock/Mahon area.” 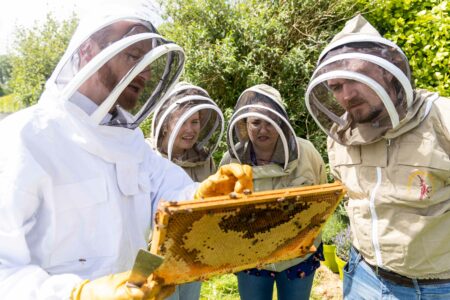 Ciara Parsons, Horticultural Therapist & Sustainability Representative at TELUS International Ireland said: “We are delighted to be celebrating our one year anniversary of the arrival of our honeybees, on World Bee Day. They have been such a great addition to our campus, helping with the pollination of our plants and enhancing the biodiversity of our garden space, while we do our bit for conservation of the native Irish honey bee.”

She added: “The on-site beekeeping demonstrations are really popular amongst our team members and help spread awareness about the importance of biodiversity conservation.”

TELUS International Ireland is also part of the All-Ireland Pollinator Plan, creating native meadows in the verges of its Mahon car park, berry bushes for birds and pollinator-friendly flowers in its famed garden.